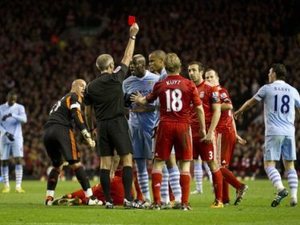 Manchester City manager Roberto Mancini accused Liverpool's players of getting Mario Balotelli sent off as the Premier League leaders were held to a 1-1 draw at Anfield.

Substitute Balotelli was given his marching orders in the 83rd minute following a second yellow card for elbowing Liverpool's Slovakian defender Martin Skrtel -- 18 minutes after the Italian had come on.

But while Mancini agreed with referee Martin Atkinson's decision to book the 21-year-old for pulling back Glen Johnson, he accused Liverpool's players of pressuring the official into producing a second yellow.

"I think so," said Mancini when asked if he thought Skrtel made the most of the incident.

"My impression is he gave a free-kick and didn't want to give the yellow card, but after all the Liverpool players went there.

"I have said many times Mario can do everything. We can't change him in one month and today he didn't deserve it," the Italian manager added.

"The last three months he has played well and scored goals. He is an important player for us."

Liverpool manager Kenny Dalglish insisted Balotelli had no one but himself to blame for his third red card in a City shirt since joining in August, 2010.

"Ballotelli got himself sent off," said Liverpool great Dalglish.

"But I don't think any of our boys influenced the referee in any way, shape or form."

Despite the end of their seven-match winning league run, City kept their lead over nearest rivals Manchester United to five points at the top of the table."

City captain Vincent Kompany gave the visitors the lead before an own goal by Joleon Lescott earned Liverpool, who were frustrated by a string of fine saves by City keeper Joe Hart, a deserved point.

"It is a good result because in the last 10 minutes we played with 10 and it is difficult here," added Mancini, whose side are back in action against Arsenal on Tuesday in the quarterfinals of the League Cup.

"Joe saved two or three situations but even with 10 men we had big chances with David Silva.

"It is a good result for us because we played five days ago in Naples and there was a difference from Liverpool because they were fresh and we were not 100 percent."

Liverpool, who are also in action on Tuesday at Chelsea in the quarterfinals of the League Cup, climbed to sixth in the table after eight games unbeaten in the league.

"I couldn't have asked for much more in terms of commitment and how we went about the job," said Dalglish, who paid tribute to Wales manager Gary Speed whose death was announced on Sunday.

Dalglish signed Speed when he was Newcastle manager in February 1998.

"Gary was a fantastic footballer and more importantly a decent fella. There will be a lot of people saddened by what has happened," he said.

"The most important people are his wife and two boys and my heart goes out to them. They will get all the support they need in the immediate future."