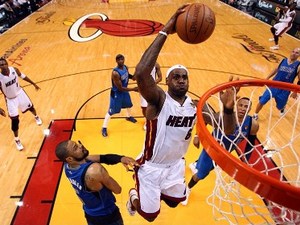 If the NBA and its players ratify a new contract in time play on Christmas Day, a shortened season would run through April 26 and require each team to play at least one stretch of games on three consecutive nights.

The NBA posted an outline of a possible schedule "assuming the season tips off on Christmas" on its website on Sunday.

The plan is a 66-game regular season, ending some 10 days later than usual.

The last possible end date for the NBA finals would be June 26, a fortnight later than the title series ended last June.

Teams would play 48 games within their conference and 18 non-conference games.

No team would play on three straight nights more than three times, but all teams would do so at least once.

NBA owners and players, and their lawyers, still have plenty of work to do in the coming days to bring the lockout to an official close and get a shortened, 66-game season underway.

A "tentative understanding" to end the labor impasse must still be put in writing and both sides must vote on it.

Players, who disbanded their union and took the league to court, must withdraw their legal action and re-form the union in order to vote on any agreement.