Barrichello Vows to Drive on 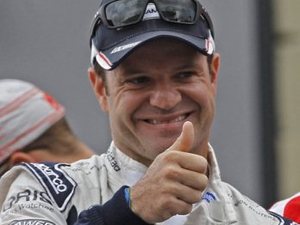 Rubens Barrichello continued to reject all talk of retirement on Monday after finishing 14th in Sunday's Brazilian Grand Prix - and insisted he will be back with Williams again next year.

The 39-year-old Brazilian, who had been urged by friends and colleagues to treat the race as a farewell event, instead continued to talk only of the future.

"I want to be here again and drive on past my 40th birthday because I love it so much," he said.

Williams are currently evaluating a clutch of younger drivers as possible contenders to replace him in the team.

But Barrichello said: "I want to thank the team for all their hard work this year.

"We have had a tough season but we've pushed together. There's been a lot of talk over the weekend, but I believe I will be back again next season."

Looking back on a race where he and Williams gambled on rain, he said: "We thought it was going to rain so we were running a long first gear. I started at the bottom of the hill, and as it was a dry start, I slipped back.

"But it was a fun race even if we don't have a car that can finish in the points just yet."

Teammate Pastor Maldonado retired from the race after losing control of his car on lap 27.

Barrichello's former teammate, 2009 world champion Briton Jenson Button, 31, said he could not image carrying on until he was 40, but added that he hoped the veteran Latin American carried on racing.

He said: "I can't imagine myself being here in another eight years, but four or five years ago I didn't think I'd be here now!

"I hope he gets a drive next year otherwise we've missed a really big party this weekend!"

And double champion German Sebastian Vettel, 24, added: 'The really inspiring bit about Rubens is he likes what he does. He is happy when he gets up in the morning and he doesn't think about his age.

"Sometimes people at that age they are sad time has passed on but for him it is a number and it doesn't mean anything. He is funny and a character and it would be sad to lose him.'"