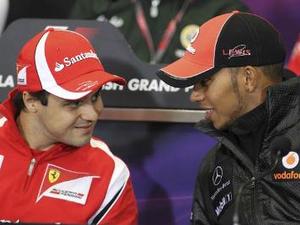 Lewis Hamilton and his old friend and recent foe Felipe Massa buried the hatchet here late Sunday when they met, hugged and sorted out their differences in the aftermath of the season-ending Brazilian Grand Prix.

The 26-year-old Briton and 30-year-old Brazilian, who had collided six times in their respective McLaren and Ferrari cars this year, had endured a long period of tense and often acrimonious rivalry.

Hamilton took the initiative by walking down the pit lane to find Massa and giving him a big hug reciprocated by the Brazilian.

Massa said: "I was pleased that Lewis came around to see me. It was a very nice gesture on his part and I think we both feel good now."

Hamilton said: "I have great respect for Felipe and it was good for me to go and see him and have a nice chat. I have always liked him and I am really looking forward to racing against him again next year."

This year's action saw the pair clash most dramatically in Monaco and Singapore where race stewards decided that the McLaren driver was to blame and gave him a drive-through penalty.

In India, they also collided, but with Massa being punished by the officials and handed a drive-through penalty. Afterwards, he told reporters that he had no intention of trying to resolve their differences.

In Sunday's 71-laps battle at Interlagos, there were further opportunities for a clash between the pair before Hamilton retired early with gearbox problems.

He said: "After all that has happened, it seemed almost inevitable. They just have had a magnetic attraction on track this year and sometimes it has gone wrong.

"For a few moments, again, we thought it might just happen again. In fact at that point Lewis didn't have a seventh gear -- so although he was quite a lot quicker, getting past Felipe was not going to be easy - in fact it was a bit of a challenge.

"I must say I am glad that they had their impromptu meeting and it was good that Lewis hugged him."

"I was very pleased to see today Hamilton come in here and hugging Felipe," he said. "At the end of the day that is what it is all about. It was a good gesture and I am very happy that today this was pretty clear."