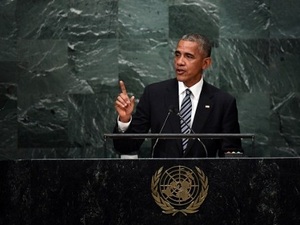 U.S. President Barack Obama insisted diplomacy is the only way to end the brutal five-year conflict in Syria Tuesday, as a ceasefire brokered by Washington and Moscow lay in tatters.

"There's no ultimate military victory to be won, we're going to have to pursue the hard work of the diplomacy that aims to stop the violence and deliver aid to those in need," Obama told the United Nations.

His comments came hours after the Syrian military declared the ceasefire over and 18 U.N. aid trucks were destroyed as they tried to bring relief to war-ravaged citizens near Aleppo.

Syria and Russia denied striking the convoy, with Moscow suggesting it may have caught fire.

Obama's Secretary of State John Kerry insisted hopes for a ceasefire remain alive after meeting his Russian counterpart and key powers with a stake in the civil war.

In brief remarks to reporters as he left a New York hotel after a meeting of the International Syria Support Group, Kerry said talks would reconvene later this week.

"The ceasefire is not dead," Kerry insisted.

United Nations envoy Staffan de Mistura confirmed that there was still hope of reviving the ceasefire, but admitted that delegates agreed it was in danger.

The 23-nation ISSG, chaired by Kerry and his Russian counterpart Foreign Minister Sergei Lavrov, met in New York on the sidelines of the U.N. General Assembly.

The talks were brief and, participants said, tense.

"The mood is that nobody wants to give this thing up," Britain's Foreign Secretary Boris Johnson told reporters.

"Quite frankly the Kerry-Lavrov process is the only show in town and we've got to get that show back on the road."

His French counterpart Jean-Marc Ayrault agreed that the meeting had been tense but argued other countries should now help Moscow and Washington overcome their differences.

"It was a fairly dramatic meeting, the mood was gloomy. Is there hope? I can't answer that yet, but we should do everything we can," he said.

"The U.S.-Russian negotiation has reached its limit. There's a lot left unsaid. The Russians and the Americans can't do it alone."

The ministers are in New York for the week to attend the U.N. General Assembly and officials said they would try to get together again to talk about Syria.

but Ja3Ja3 says that there is only one way to end the conflict, ISIS & Nusra have to win and rule Syria..........Hariri and Rifi share this view.