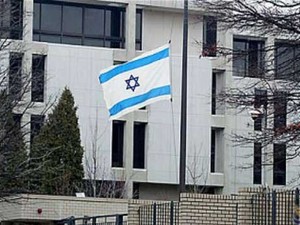 A mentally disturbed Turkish man wielding a knife tried to storm the Israeli embassy in Ankara on Wednesday but was shot by police before reaching the building, Turkish and Israeli officials said.

The man, armed with a 30-centimeter (12-inch) knife, ran towards the embassy shouting slogans and was shot in the leg, the governor's office in the Turkish capital said in a statement.

It said initial investigations showed that the man, named as Osman Nuri Caliskan, "appeared to be mentally disturbed" and had no record of links with any militant group.

Suat Gencer, a florist working nearby, said he heard four shots and then ran to the embassy to see what had happened.

"I saw a man who had been shot in the leg. I didn't see a knife but other witnesses said he had a knife and he would set a bomb off," he told AFP at the scene.

Video footage showed the man sitting in the road in agony with a wounded leg after being shot, with drops of blood on the tarmac and a policeman pointing a gun at him before he was detained.

Israeli foreign ministry spokesman Emmanuel Nahshon said in a statement all its embassy staff were safe and the man reached only the "outer perimeter" of the embassy.

The Israeli embassy said on its Facebook page that the man had been shot by a Turkish police officer stationed outside the mission, thanking the local police for their "professional performance."

The incident came with foreign missions in Turkey on a state of high alert following a spate of attacks across the country this year blamed on jihadists and Kurdish militants.

The British embassy in the Turkish capital Ankara was closed on Friday over security concerns while the German embassy offered only limited services.

Three months ago, Turkey and Israel signed a deal to restore their ties which hit an all-time low after the 2010 raid by Israeli commandos on a Gaza-bound aid ship that left 10 Turks dead.

Under the deal, they are to begin the process of exchanging ambassadors to fully restore their diplomatic ties, although this has yet to formally take place.

Despite the crisis, the Israeli embassy in Ankara and consulate in Istanbul have carried on working in the last years, under heavy security.

Israel had already offered compensation and an apology over the raid. With the agreement Ankara has been able to resume delivery of humanitarian aid to the Palestinians through Israel.

Turkey's NTV television said employees of the embassy took refuge in a shelter during the incident on Wednesday.

The Hurriyet daily said the man had shouted "I will change the Middle East!" when advancing on the embassy building.

In a statement to police later, the suspect added: "I did it to stop the bloodshed in the Middle East," the paper said.

Three Israelis and an Iranian were killed in March in a bombing in central Istanbul blamed on Islamic State (IS) jihadists. Israel subsequently upgraded its security advice for Turkey, encouraging citizens to leave.

Israel was quick to give its support to the Turkish government in the aftermath of a July 15 coup bid, condemning it while repeating its faith in the reconciliation process.

Turkey appears to be moving back to its previous "zero problems with neighbors" foreign policy after the country also normalized relations with Moscow damaged after Turkey shot down a Russian jet in November last year.

Turkey's Prime Minister Binali Yildirim has also indicated interest in improving relations with Egypt -- damaged after the ousting of pro-Ankara president Mohamed Morsi -- and even Syria amid the five year civil war.