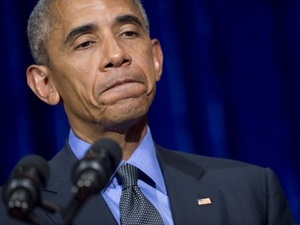 President Barack Obama is poised to veto legislation exposing Saudi Arabia to court action over the 9/11 attacks, stepping in to defend legal precedent and an awkward ally, but inviting election-time opprobrium.

White House officials say Obama will reject the "Justice Against Sponsors of Terrorism Act" by a Friday veto deadline, after a little over a week of deliberation.

The administration is worried the bill -- passed unanimously by Congress -- would undermine state immunity, setting a dangerous legal precedent.

Obama's aides tried and failed to have the legislation substantially revised, and now face the prospect of Republicans and Democrats joining forces to override the presidential veto, a relatively rare rebuke of White House power.

Families of 9/11 victims have campaigned for the law -- convinced that the Saudi government had a hand in the attacks that killed almost 3,000 people.

Fifteen of the 19 hijackers were Saudi citizens, but no link to the government has been proven. The Saudi government denies any links to the plotters.

"Fifteen years is already far too long to be asked to wait for accountability for the deaths and injuries suffered in the 9/11 attacks," said widow Terry Strada.

Strada gave birth days before her husband, Tom, a bond broker at Cantor Fitzgerald, was killed in World Trade Center Tower One.

Behind the scenes, Riyadh has been lobbying furiously for the bill to be scrapped.

A senior Saudi Prince reportedly threatened to pull billions of dollars out of U.S. assets if it becomes law, but Saudi officials now distance themselves from that claim.

The U.S.-Saudi relationship had already been strained by Obama's engagement with Saudi's Shia foe Iran and the July release of a secret report on Saudi's involvement in the attacks.

Declassified documents showed U.S. intelligence had multiple suspicions about links between the Saudi government and the attackers.

"While in the United States, some of the 9/11 hijackers were in contact with, and received support or assistance from, individuals who may be connected to the Saudi government," a finding read.

- White House dilemma -This would be the twelfth veto of Obama's eight-year presidency and one of his most politically fraught.

Congressional insiders insist they have the votes needed to override, in what would be a significant blow for the White House in the final months of Obama's presidency.

The White House is holding out vague hope that convoluted Congressional rules could delay the override until after the November 8 election, when the politics may be less toxic and minds may be changed.

Until then, Republicans will certainly use the veto to cast Obama as putting monarchs in Riyadh before U.S. terror victims.

The Republican nominee, Donald Trump has already tried to paint Obama and his would-be successor Hillary Clinton as week on terrorism.

He has vowed to challenge Clinton in his home state of New York, where he lags by 17 points but where the 9/11 bill has become a major political issue and could have an impact on Congressional and state races.

Democrats have been quick to insulate themselves from criticism by backing the bill, not least cosponsor New York Democratic Senator Chuck Schumer.

Meanwhile, Clinton has voiced support for Congressional efforts "to secure the ability of 9/11 families and other victims of terror to hold accountable those responsible," according to Jesse Lehrich, a campaign spokesman.

- Diplomatic allies -The White House is getting some backing from diplomatic allies who share concerns about the United States becoming a venue for citizens to sue governments.

In a diplomatic protest note obtained by Agence France Presse, the European Union warned the rules would be "in conflict with fundamental principles of international law."

"State immunity is a central pillar of the international legal order," the "demarche" noted, adding that other countries could take "reciprocal action."

"Our troops, our diplomats and all U.S. government personnel working overseas could very well find themselves subject to lawsuits in other countries," they said.

"Our national security interests, our capacity to fight terrorism and our leadership role in the world would be put in serious jeopardy."

So once they get rid of him on Jan 21st they'll simply bring it up again.