Anti-Govt. Protest in Jordan over Murder of Writer 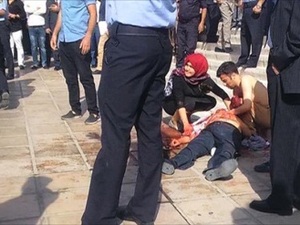 Protesters called on Monday for Jordan's government to resign over its failure to prevent the murder of the writer Nahed Hattar outside an Amman court.

"The people want the fall of the government... No security, they killed Nahed in Amman!" were among the chants of hundreds of sympathizers and members of the writer's tribe outside the premier's office.

The family, charging that authorities were warned of threats to Hattar's life and had failed to act, have so far refused to collect his body for burial.

Jordan's judiciary on Monday slapped a media blackout on the murder, a day after he was gunned down on arrival at the court to face charges over an anti-Islam cartoon.

The information ministry said the aim was to preserve "the secrecy of the investigation" and that the blackout applied to both social and traditional media.

Hattar had faced charges over a cartoon he posted on Facebook under the title "God of Daesh" (the Islamic State jihadist group) showing a bearded man in bed smoking with two women lying on either side, and addressing God as a servant.

On the streets, demonstrators carrying his portrait on Monday called for the resignation of both Prime Minister Hani al-Malki and Interior Minister Salama Hammad.

"We handed over 200 names (of people who had threatened the writer) to the governor (of Amman), including that of the assassin, and demanded protection," said Khaled Hattar, one of the victim's brothers.

"But he refused, saying there was 'no real threat'."

Hattar was hit by three bullets before the alleged assassin was arrested at the scene of the shooting in the capital's Abdali district, official media said.

The assailant -- bearded and robed like a conservative Muslim -- shot the 56-year-old as he made his way up the steps outside the court.

The gunman, identified as a 49-year-old Jordanian, gave himself up to police, a security source said.

A judicial source said the assailant was remanded for 15 days and charged with premeditated murder, facing the death penalty if convicted.

The suspect had acted alone and was not linked to any "terrorist" group, a source close to his interrogation said, asking not to be named.