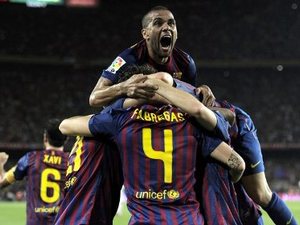 Barcelona defender Dani Alves played down the significance of Real Madrid’s six-point lead at the top of La Liga, but admitted that there is pressure on the team not to drop more points.

Real continue to set the pace after a 4-1 derby win over Atletico Madrid at the weekend while Barcelona once again struggled away from home, losing 1-0 at Getafe.

The champions, who tackle Rayo Vallecano on Tuesday, have recorded 5-0 and 4-0 wins in their last two home games against Mallorca and Zaragoza respectively.

But away from the Nou Camp they drew their previous game at Athletic Bilbao and scraped 1-0 wins in their two matches before that.

Barca have lacked their usual fluid passing on their travels but perhaps the key difference is in the performances of star man Lionel Messi who has 14 goals to his name at home and just one away.

"At the moment a lot of people are awarding the league already and getting carried away but there is still a long way to go," said Alves.

"As long as it is still possible to win then the championship is alive and this is a challenge which we are enjoying. One of the most important elements to this team is that we never give up," added Alves, who accepts that the first El Clasico on December 10 at the Bernabeu is now a crunch match.

"A nine-point difference -- if we lose at the Bernabeu -- would be tremendous but I am not thinking like that because we are going to bounce back. We will go and compete as we always do.

"Our margin for error is now over and we must get ourselves ready for the challenge. You cannot go from being a fantastic team to being nothing.

"While people tend to be extreme we need to be balanced. We will never change our way of playing due to results, we have a philosophy and if we are to die then we will die with that."

Barcelona’s match with Rayo has been brought forward from next month as the Spanish and European champions are involved in the Club World Cup in Japan.

Rayo lost 2-1 to Valencia at the weekend but they have started the season well and although survival is their aim they currently have the European places in their sights.

"This is a special game for any footballer as Barca have a great stadium and they are a great team. It is the kind of match which had to come sooner or later and we will try and perform well," said striker Raul Tamudo.