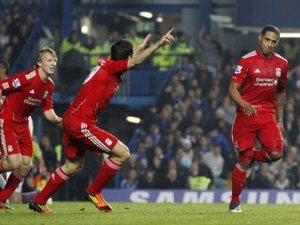 Fans of the eight clubs left in this season's English Carling Cup will find out just how much the tournament means to their respective sides in this week's quarterfinals.

In recent seasons the knockout competition for England's top four flights has lagged low in the pecking order for leading clubs, who place a far greater emphasis on winning the Champions League, Premier League and even FA Cup competitions.

With Manchester City five points clear at the top of the Premier League table, and chasing their first domestic title for more than 40 years, there will be a strong temptation for manager Roberto Mancini to rest some of his star names against Arsenal.

Traditionally, that has been the course of action favored by Gunners boss Arsene Wenger.

But the Frenchman, whose side lost last season's final to Birmingham, can no longer afford to be quite so disdainful of the tournament given it is six years since Arsenal last won a major trophy.

However, with both clubs still involved in the Champions League, the line-ups at the Emirates Stadium are set to have an unfamiliar look about them.

"I will have to change the team because some players are on the fringe, muscular-wise," Wenger said.

Both City and Arsenal go into the match on the back of 1-1 league draws against Liverpool and Fulham respectively.

Chelsea stopped a losing streak with a 3-0 win over Wolves and an appearance in the first final of the season would help ease the pressure on under-fire manager Andre Villas-Boas.

Liverpool boss Kenny Dalglish won the League Cup several times as a player during his glittering career with the Anfield club.

Dalglish has hinted that he will give run-outs to fringe players and one of those, former Rangers defender Danny Wilson, said: "Chelsea will be an important game. All I can do is try to impress Kenny Dalglish in training and for the reserves."

Tuesday's other quarterfinal will see Championship high-flyers Cardiff fancy their chances against a Blackburn Rovers team who are two points adrift at the bottom of the Premier League.

Top-flight survival is the priority for Steve Kean's side but Rovers and Norway star Morten Gamst Pedersen said: "Everyone knows our position in the Premier League but that doesn't mean we do not want to do well in the cup.

"It's a great carrot for us because winning can be a habit."

Manchester United manager Sir Alex Ferguson is again set to give his latest crop of up and coming players a League Cup run out when they face mid-table Championship side Crystal Palace in Wednesday's quarter-final at Old Trafford.

"There will be complete change," said Ferguson.

"I think the League Cup has turned into quite a good tournament. Clubs like United are able to introduce young players and ones who have not been playing regularly in the first team and it's been good to us over the years.

"We've won two finals at Wembley with young players, which is good going."