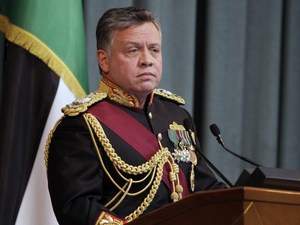 Jordan's King Abdullah II on Thursday visited the home village of slain writer Nahed Hattar to pay condolences to his family, following his murder outside an Amman court.

The king "strongly condemned this heinous crime" which was "alien to our (Jordanian) culture," the royal palace said in a statement.

Abdullah, accompanied by Prime Minister Hani al-Malki on the visit to the Christian village of al-Fuhais, 20 kilometers (12 miles) northwest of Amman, stressed that Jordan's Muslims and minority Christians were united against "extremism, violence and bigotry."

Hattar, 56, was shot dead by a bearded assailant on Sunday on the steps of an Amman court where he was on trial for insulting Islam with a cartoon he shared on social media.

Hattar's family accused the authorities of failing to protect the writer despite warnings that his life had been under threat.

They also called for the resignation of both Malki and Interior Minister Salama Hammad.

A source close to the family said the king had pledged to ensure the prosecution of anyone who had incited Hattar's murder.

The assailant, who surrendered to police at the scene, has been charged with premeditated murder, terrorism and possession of an illegal firearm. If convicted, the suspect could face the death penalty.