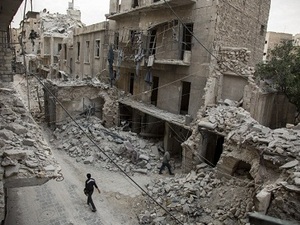 Russia on Thursday said it is pressing on with its bombing campaign in Syria despite the U.S. warning it will end talks on the conflict if Moscow does not halt the assault on Aleppo.

A ceasefire deal hammered out between Moscow and Washington that could have led to the two countries coordinating strikes on jihadists has unraveled in acrimony, with both sides blaming each other for the failure.

Russia is backing up a ferocious assault by the forces of Syria's President Bashar Assad to seize the rebel-held eastern half of the city of Aleppo that has sparked condemnation from the West.

Kremlin spokesman Dmitry Peskov insisted Moscow was still interested in seeing the deal with the U.S. work out, but said Washington had failed to deliver on its side of the bargain.

"We have unfortunately taken note of the rather unconstructive character of the rhetoric from Washington over the past few days," Peskov said.

"Moscow maintains its interest in cooperating with Washington for the realization of the agreement."

In the meantime, Peskov said "Moscow is continuing its air operation to support the anti-terrorist actions of the Syrian armed forces."

U.S. Secretary of State John Kerry told his Russian counterpart Sergei Lavrov on Wednesday that possible plans to set up a joint U.S.-Russia military cell to target jihadist groups in Syria could also be put on hold.

Kerry and Lavrov have been leading international efforts to bring Syria's five-year-old civil war to an end, and on September 9 agreed to demand a ceasefire.

Moscow was to order its ally Syrian leader Bashar Assad to rein in his military and end the bombardment of civilian communities, and Washington was to persuade rebel forces to separate themselves from the jihadist Fateh al-Sham, the former al-Qaida affiliate once known as al-Nusra Front.

But fighting continued and the truce collapsed.

In Moscow, the defense ministry said Wednesday that it was "ready to continue joint work with our American partners on the Syrian issue" but gave no sign that Russia is ready to ground the Syrian air force.

Good, do not bow down to the U.S ever.