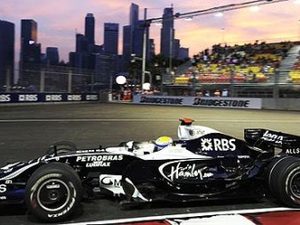 Williams cofounder Patrick Head says he is ending his involvement in Formula One.

This season, however, the English team scored only five points.

Head says he’s leaving as director of engineering “to have a change of focus.”

He will instead work on the company’s hybrid business.

Jenson Button, the 2009 world champion and former Williams driver, tweeted that Head “believed in me as a teenager & gave me a chance in F1.”