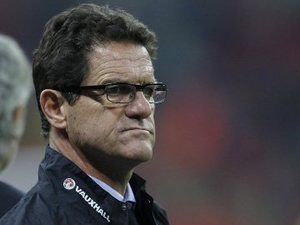 England manager Fabio Capello has tipped former clubs AC Milan and Juventus to fight for the Serie A title this season.

Speaking to journalists on a trip to Milan for a convention, the 65-year-old put his faith in his former employers, who are separated by a point at the top of Serie A.

However, he also believes inconsistent Napoli are capable of pushing the pair to their limits.

Ahead of Tuesday night's clash with leaders Juve, Napoli are down in eighth and nine points off the pace.

"There's a long way to go in the league but those three will fight to the end for the title," said Capello.

"Milan have the best squad but also the most commitments. They're strong, balanced and used to staying at the top.

"Napoli, on the other hand, have to get used to managing the tiredness and tension that build up from being in the Champions League.

"As they're not in the Champions League, Juve are among the favorites."

Another advantage Juve have is they are the first team in Italy to have built their own stadium.

All other teams rent their stadiums from their local council.

"Owning their stadium is a plus for clubs, you just have to look at Juventus who now feel at home in Turin," added Capello.

"The fans in the new stadium feel like they're part of an adventure, I doubt anyone will ever break a seat in that ground."

"The youth-team championship is useless, the level isn't high enough to allow players to improve," he said.

"In England you can loan players for two months and that works well, otherwise it would be good to have a reserve team in the second division.

"There you would be able to see for sure if a player is equipped for a big team or not."

And Capello rounded off with a broadside aimed at player agents.

"They shouldn't evaluate how much their client would earn at a big club but how much he would lose from making the wrong choice," he said.