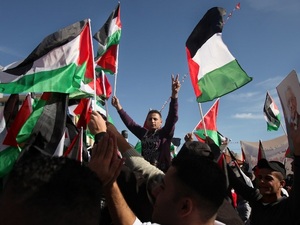 Almost two-thirds of Israelis believe there will never be a peace agreement with the Palestinians, according to the results of an opinion poll published on Sunday.

Sixty-four percent of the 646 Israeli and Arab Israeli respondents questioned said a peace accord would never be reached, in the survey conducted by the Project HaMidgam institute for the Walla news website.

Twenty-four percent believed an accord was possible but that it would take longer than five years to achieve, while four percent thought it could be attained within five years.

The remaining eight percent were undecided in the poll, whose margin of error was not published.

The peace process between Israel and the Palestinians has been comatose since the collapse of a U.S.-led initiative in April 2014.