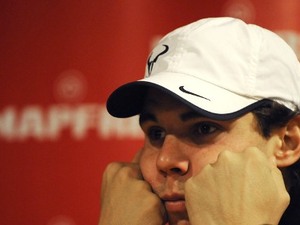 Spanish star Rafael Nadal on Tuesday played down the pressure the hosts will be under ahead of their Davis Cup final clash against Argentina here this weekend.

"We're under the same pressure as they are, we have to win the Davis Cup," insisted the world number two, who has lost just one singles rubber in the competition since making his debut in 2004.

Spain have won the title four times in the past ten years, while Argentina have never lifted the trophy, finishing runner-up three times.

But team leader Nadal insisted that playing at home did not increase the pressure.

Nadal will spearhead the team which includes 24th-ranked Fernando Verdasco, Feliciano Lopez (20) and David Ferrer (5), the same line-up that clinched Spain’s last Davis Cup triumph in 2009 against the Czech Republic.

"The 2008 final was painful for Argentina, so it's normal that this time they'll have a special motivation," said Verdasco.

Spanish captain Albert Costa said his side was determined "the Cup stays here," adding: "It's hard to say who has the greater percentage chance of winning between the teams. I don't like giving figures. If we do things well, then we'll have a chance.

"One thing that's sure is that all the matches will be long and tough."

Argentina's bid to create history starting on Friday will be led by 11th-ranked Juan Martin Del Potro, who will be joined by Juan Monaco (26), Juan Ignacio Chela (29) and David Nalbandian (64).

"Spain are playing at home and are favorites, so they are under a lot of pressure too," said Nalbandian. "The 2008 final was completely different."

Del Potro admitted it would be hard to beat the Spanish on clay, at the La Cartuja Stadium where the hosts beat the USA 3-2 to win their 2004 final.

"Spain on brick dust are perhaps the best team in history."

But Argentina captain Tito Vazquez warned: "They are favorites with (Rafa) Nadal and (David) Ferrer, but anything can happen, we could lose 1-4 or win 4-1."