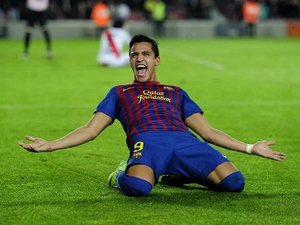 An Alexis Sanchez brace helped Barcelona to a 4-0 victory over Rayo Vallecano on Tuesday which reduced Real Madrid’s lead to three points and showed they will not give up their title without a fight.

Barca were given a quick chance to respond to their 1-0 away defeat to Getafe at the weekend as this fixture was brought forward due to the Catalan side’s involvement in the Club World Cup next month in Japan, and they ran out resounding victors.

While Real have been in ominous form and recorded their 13th consecutive victory by beating local rivals Atletico Madrid at the weekend, Barca have stuttered recently away.

At home though they have been as impressive as ever and with their victory over Rayo they have now scored 34 goals without reply at the Camp Nou.

Barca coach Pep Guardiola was keener to praise Sanchez's impact on his return.

"Alexis (Sanchez) isn’t a striker but he also can do this job which helps us a lot," said Guardiola.

"He was injured for a while but before that he was very useful for us and then coming back he needed a bit of time. I have to congratulate him for his performance here."

Rayo coach Jose Ramon Sandoval was satisfied that his team gave their best.

"There was nothing for us to do but show our credentials by going out to win. We have given the Primera Division our style of football and I am more proud than ever of my players," he said.

Barcelona started nervously until Sanchez gave them the lead after 28 minutes and then before the break the Chilean again and David Villa gave them a commanding advantage. Lionel Messi made it 4-0 four minutes into the second half.

Andres Iniesta returned to Barca’s starting line-up while Cesc Fabregas, also fit again, was on the bench along with the rested Sergio Busquets.

Promoted Rayo lost at home to Valencia on Saturday but they have had a fairly good start to their first top-flight campaign since 2002-03.