Miqati: Major Gap between My Electorate and FPM's Candidate 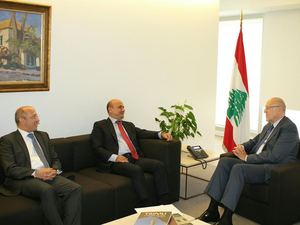 Tripoli MP and ex-PM Najib Miqati told a Free Patriotic Movement delegation on Monday that there is a “major gap” between his supporters and FPM founder MP Michel Aoun, whose chances to be elected president have largely surged in recent days.

“We share the FPM's vision regarding the essential, national and reformist issues, but as to the presidency I was clear with the FPM delegation about the presence of a major gap between a segment of the Lebanese, especially those whom I represent, and the FPM's candidate,” Miqati said after talks at his office with MPs Simon Abi Ramia and Alain Aoun.

“We discussed this issue and this remains my stance and hopefully the stances will become clearer in the coming days,” the ex-PM added.

“I explained that any bilateral agreements cannot negate the historic accumulations regarding the ties among all Lebanese,” Miqati went on to say.

Hariri, who is close to Saudi Arabia, launched an initiative in late 2015 to nominate Marada Movement chief MP Suleiman Franjieh for the presidency but his proposal was met with reservations from the country's main Christian parties as well as Hizbullah.

Miqati should be grateful that general aoun made him prime minister. Instead he stabs him in the back because of his 5 person electorate base.