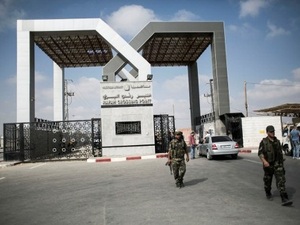 An Israeli working along the border with Egypt was shot and killed on Tuesday, the Israeli army said, while also noting the incident did not appear related to "terror activities."

The defence ministry said earlier an employee for a contractor carrying out work on a border fence was wounded by gunfire.

A military spokeswoman confirmed the man had died while being airlifted and said the gunfire came from the Egyptian side of the border, but could provide no further details.

"Initial indications suggest the shooting does not appear to be connected to terror activities," a military statement said.

"The incident will be reviewed. The (Israeli military) is coordinating with the Egyptian Armed Forces."

The shooting occurred in the Har Harif area midway along the 240-kilometer (150-mile) border between Egypt's Sinai Peninsula and Israel.

Jihadists loyal to the Islamic State group are waging a deadly insurgency in Egypt's Sinai.

In the same area in 2012, an Israeli soldier and three militants who infiltrated from Sinai were killed in a clash along the border.

Banditry and drug trafficking also occur in the area.

In 2014, two Israeli soldiers were wounded when suspected drug smugglers fired shots and an anti-tank missile from the Sinai at their vehicle patrolling the frontier.

Egypt and Jordan are the only two Arab countries to have peace treaties with Israel.

In 2013, Israel erected an electronic fence along its southern border with Egypt.

Sadly, the dead Israeli was a 15 year old boy from the Bedouin Arab town of Laqia.