All Eyes on Kiev for Euro 2012 Finals Draw 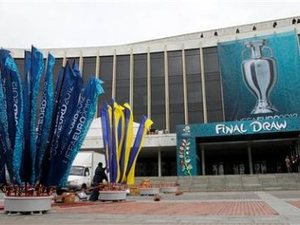 Europe's top football nations gather in Kiev on Friday to discover their fate when the draw takes place for Euro 2012 with all eyes looking out for the cliched 'Group of Death'.

The draw takes place at the National Palace of Arts in the Ukrainian capital with a host of previous European champions set to help out to decide which teams will play where and when with the tournament set to kick-off on June 8.

Four groups made up of four sides will be drawn with a team coming from each of four pots and the draw will be beamed by 70 broadcasters to 150 countries around the world.

Cohosts Poland and the Ukraine are both in Pot One, along with World Cup finalists Holland and holders Spain, who have to be regarded as favorites owing to their status as World and European champions.

Football powerhouses Germany, England, Italy and Russia are in Pot Two and none of the four will give their opponents an easy time in the group stages.

Former European champions Greece, who lifted the Euro 2004 title, are in Pot Three along with Portugal, Sweden and Croatia.

Potentially, Spain, who lifted the Euro 2008 title in Vienna, could find themselves along with Greece, France and Germany, Euro '96 winners, in a group made up of the last four title winners.

But whatever the groups throw up, France coach Laurent Blanc has said he is just eager to avoid Germany, who along with Spain, came through their qualification campaign with the perfect record of ten wins.

The Frenchman told sports daily L'Equipe he has lit a candle with a prayer "France is not in the same Euro 2012 group as Germany".

Since finishing third at the 2010 World Cup finals, Germany have impressed this year with friendly wins over Brazil and Holland, but coach Joachim Loew said he is in a relaxed mood.

"I have no potential dream or nightmare opponents, we know that anything is possible and we will take the draw as it comes," said the 51-year-old.

"The European Championships involve the top teams and is an attractive tournament, there won't be any easy games either in the group stages or the knock-out games.

"If Euro 2012 was starting tomorrow, I would be pleased. But a lot can change in football in six months."

While the Germans would no doubt like to avoid Spain, who beat them in the 2010 World Cup semi-final, the feeling is mutual.

"Germany has added the extra characteristics of 'tournament team' and 'battled-hardened' to their qualities," said Spain coach Vicente del Bosque.

And he has also warned against Spanish complacency.

"The challenge ahead is to do the best possible, because we have an added responsibility after winning the European Championships and the World Cup," he told Spanish newspaper Sport.

Holland coach Bert van Marwijk has said the Oranje have no one to fear, despite Germany's 3-0 drubbing of the Dutch in Hamburg on November 12.

The Three Lions of England will also be amongst the favorites to lift the title in the final to be held in Kiev on July 1.

The three-week long tournament will be hosted by four cities in each country: Warsaw, Wroclaw, Gdansk and Poznan in Poland; Kiev, Donetsk, Kharkiv and Lviv in the Ukraine.

The tournament was awarded to the former Warsaw Pact nations in April 2007, when bids from Italy and Croatia-Hungary were narrowly beaten.

Despite a few anxious moments, it looks like the organizers are on track for a successful Euro 2012 as UEFA president Michel Platini announced in September that the two countries are 'virtually' ready.

New stadiums in Gdansk, Warsaw and Kiev have now opened and UEFA will be hoping at least one of the host nations makes it to the knock-out stages, unlike Austria and Switzerland, who both exited early at Euro 2008.