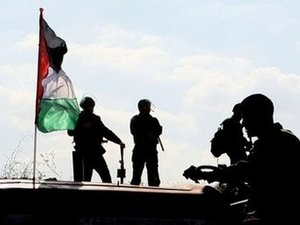 Israeli troops on Thursday shot dead a Palestinian who tried to stab a soldier near the West Bank settlement of Ofra, the army said.

"Palestinian assailant armed with a knife attempted to stab an Israel Defense Forces soldier guarding a bus stop near the community of Ofra," a statement in English said.

"Responding to threat, forces at the scene shot the assailant, resulting in his death," it said.

The Palestinian health ministry named him as Ma'en abu Qaraa, 23, from an area northwest of Ramallah in the occupied West Bank.

A wave of Palestinian knife, gun and car-ramming attacks began a year ago, but the violence has significantly declined in recent months.

Since October last year, the violence has claimed the lives of 238 Palestinians, 36 Israelis, two Americans, a Jordanian, an Eritrean and a Sudanese, according to an AFP count.

Most of the Palestinians killed were carrying out attacks, according to Israeli authorities. Others were shot dead during protests and clashes, while some were killed in air strikes in the Gaza Strip.

Most of the attacks were by lone-wolf assailants, many of them young people including teenagers.