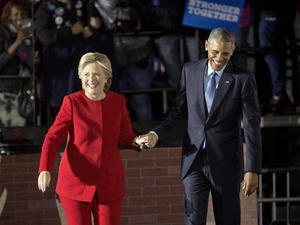 Barack Obama on Monday harnessed history and all of his vaunted oratorical skill in a final campaign push to see Hillary Clinton elected the first woman president of the United States.

Obama spent the day campaigning for his first secretary of state, jetting from Michigan to New Hampshire to Pennsylvania.

But his last speech before electors cast their ballots to replace him -- before tens of thousands of Democrats in Philadelphia -- indeed felt like a rousing final farewell.

"You gave me a chance" he told the diverse crowd gathered on a chilly night in the City of Brotherly Love. "A skinny guy with a funny name."

"You bet on me," he said, "I've always had the better odds, because I've always bet on you."

This was Clinton's event, but it seemed tailor-made for the 44th president.

Obama, critics might say, has never found a problem to which the answer is not a speech.

But even his fiercest opponents would acknowledge his rhetorical prowess and his writer's sensibility for history.

On Monday, he was speaking at the city's Independence Mall, amidst a bank of floodlit buildings that almost seemed to have been wheeled in as theatrical props, were it not for the deep history they represented.

Beyond Obama's podium, beyond the illuminated sea of faces lay Independence Hall, where the Declaration of Independence and the U.S. Constitution were forged.

Of all the sites with a claim to be the birthplace of American democracy -- Provincetown, Boston, Lexington or Concord -- Philadelphia's voice perhaps rings loudest.

The venue was made for that message. Democrats -- Obama above all -- have framed this election as an existential choice: Trump or the Republic, the unifier or the outlier.

Against that backdrop, Obama did what he's done so many times before -- he presented the sweep of American democracy as culminating in a single place and a singular time.

Eight years ago, that place was Grant Park in Chicago and that moment was Obama's own election as America's first black president.

Then, Obama saw his campaign as a tourniquet for the cynicism and racism that had poisoned the bloodstream of U.S. politics.

"If there is anyone out there who still doubts that America is a place where all things are possible, who still wonders if the dream of our founders is alive in our time, who still questions the power of our democracy, tonight is your answer," he told the emotional crowd in the Windy City.

His victory was painted as a logical next step, or as Obama might say --paraphrasing his hero Martin Luther King Jr -- bending the moral arc of the universe a little closer toward justice.

Now, on the eve of the 2016 presidential election, Obama portrayed electing Clinton as America's first woman president as the next logical step.

"In this place, where our Founders forged the documents of freedom, in this place where they gave us the tools to perfect our union, if you share my faith, then I ask you to vote," he said, expressing a faith in voters that others may not see after this inglorious campaign.

"I'm betting that tomorrow, most moms and dads across America won't cast their vote for someone who denigrates their daughters," Obama said.

"I'm betting that tomorrow, true conservatives won't cast their vote for somebody with no regard for the Constitution," he added.

"I am betting that African-Americans will vote in big numbers because this journey we've been on was never about the color of a president, but about the content of his or her character."

Within hours, Americans will prove him right or wrong.