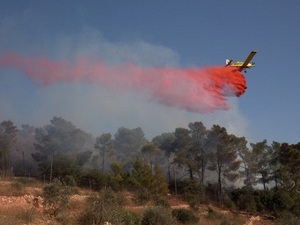 Firefighters have extinguished blazes that ravaged Israel and the occupied West Bank for five days and forced tens of thousands to flee, authorities said Sunday, blaming arsonists for some outbreaks.

There were no deaths but some 122 people were treated for injuries, mainly due to smoke inhalation, medical officials said.

Around 700 homes were damaged or destroyed as the blazes fed by high winds and dry conditions ripped through thousands of hectares (acres).

In recent days, firefighting planes from a list of countries could be seen sloping low over the hills of the occupied West Bank and Israel dropping tonnes of water and retardants.

At one point last week, flames towered over an area near Jerusalem, and residents on Sunday were left surveying their charred homes and businesses.

"There are no active sites left," fire and rescue service spokesman Yoram Levy told AFP. "Since last night it's pretty calm. We have no new activity."

According to Levy, firefighters dealt with about 2,000 fires in Israel and the West Bank, 20 of them major.

The Israeli authorities suspect that some of the fires were set alight on purpose and linked to the Israeli-Palestinian conflict.

Defense Minister Avigdor Lieberman said Sunday that 17 of 110 fires in the West Bank were so far determined to be arson, without providing further details.

Speaking at the Israeli settlement of Halamish in the West Bank, where dozens of homes were damaged at the weekend, he said Israel should respond to any arson by building more settlement homes.

Police have arrested 23 people suspected of lighting fires and interrogated another seven.

However, Palestinian authorities also joined in the massive international effort to douse the fast-spreading fires and have pointed to damage to their crops and land.

Israeli Prime Minister Benjamin Netanyahu made a rare phone call to Palestinian President Mahmoud Abbas on Saturday to thank him for those efforts.

Levy noted forces were still "on high alert" due to dry conditions and high winds that were not expected to change prior to rainfall expected on Wednesday.

In an example of the risks, a forest fire was extinguished on Sunday near Kiryat Malakhi in southern Israel.

Israeli firefighters had since Tuesday been battling wildfires throughout the country which on Thursday hit major city Haifa, forcing tens of thousands to evacuate their homes.

Around 1,000 residents of Halamish near Ramallah in the West Bank had to flee at the weekend.

Some 45 homes there were damaged or destroyed by fire, police said.

Firefighting planes from Israel and countries including Russia, Turkey, Greece, France, Spain and Canada dumped tonnes of water and retardants.

A U.S. Supertanker, considered the largest firefighting aircraft in the world, joined the emergency operation on Saturday.

Palestinian authorities sent 41 firefighters and eight trucks on Friday. They helped with fires in Haifa and the Jerusalem area, and returned to the West Bank on Saturday night.

Israel's Nature and Parks Authority said tens of thousands of hectares (acres) of forest and shrubland had burned.

Fires that hit Palestinian areas of the West Bank were also out by Saturday night, with the Ramallah-based Civil Defense saying it had dealt with 143 blazes which burnt crops and trees but caused no casualties.

Speaking at Halamish on Sunday, Israeli Education Minister Naftali Bennett said that "the person who threw the firebomb -- which was found -- that lit the fire here tried to murder the residents of an entire settlement, no less."

Israeli authorities had not confirmed the Halamish fire was started by arson.