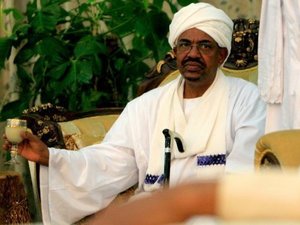 Sudan delayed the expulsion of Kenya's ambassador by two weeks to give Nairobi time to cancel a warrant for the arrest of President Omar al-Bashir, the foreign ministry said on Saturday.

A Kenyan judge on Monday issued the local warrant for Bashir, who is wanted by the International Criminal Court (ICC) for war crimes and genocide in Sudan's war-torn Darfur region, after the government failed to arrest him when he visited Nairobi last year.

The move triggered a furious response from Khartoum, which ordered Kenya's ambassador to leave within 72 hours, said it was pulling out its representative in Nairobi and would bar all flights in and out of Kenya from entering Sudanese airspace.

"Sudan will wait for a period of two weeks to give Kenya the opportunity to contain the matter and take the measures required," foreign ministry spokesman Al-Obeid Meruh said in a statement received by AFP on Saturday.

"But Sudan will have no choice except to move forward with steps already begun, to expel the ambassador of Kenya and withdraw its ambassador in Nairobi."

The announcement follows a visit to Khartoum on Wednesday by Kenyan Foreign Minister Moses Wetangula, who held talks with Bashir and said after his return to Nairobi that bilateral relations were "back to normal."

The Kenyan government had said it would do "everything within its powers" to ensure the warrant did not damage Kenya's ties with Sudan, vowing to contest the court ruling.

Kenya has ratified the ICC's founding Rome statute, which theoretically obliges it to execute the court's warrants.

The United Nations says at least 300,000 people have been killed and 1.9 million remain displaced since conflict broke out in Darfur in 2003, when non-Arab rebels took up arms against the Arab-dominated regime for a greater share of resources and power.

The ICC chief prosecutor Luis Moreno-Ocampo accuses Bashir of having personally instructed his forces to annihilate three ethnic groups -- the Fur, the Masalit and the Zaghawa.

Moreno-Ocampo on Friday sought an arrest warrant for Defense Minister Abdelrahim Mohamed Hussein, for his alleged role in the atrocities committed in Darfur between August 2003 and March 2004.