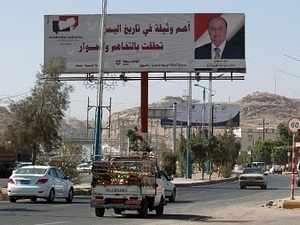 The White House has blocked the transfer of precision munitions to ally Saudi Arabia, amid anger about the civilian death toll from the kingdom's bombing campaign in Yemen.

"We have made clear that US security cooperation is not a blank check," a senior administration official told AFP, voicing concerns about how Riyadh is prosecuting its war against Iranian-backed Huthi rebels.

"Consequently, we have decided to not move forward with some foreign military sales (FMS) cases for munitions."

"This reflects our continued, strong concerns with the flaws in the coalition's targeting practices and overall prosecution of the air campaign in Yemen."

Other U.S. officials confirmed the proposed sale was of precision guided munitions made by U.S. firm Raytheon.

The decision brings a simmering division between the already troubled allies into public.

The White House has long struggled to balance its unease over the prosecution of the Saudi campaign and risking a broader feud with a key Middle Eastern partner.

The campaign has been closely linked to young Prince Mohammad bin Salman, who has rapidly emerged as a leading player in Riyadh.

The war in Yemen has also coincided with the Obama administration's assiduous courting of Saudi support for the nuclear deal with Iran.

Since then, ties have been further strained by Congress's recent passage of a bill allowing 9/11 victims to sue Saudi Arabia.

Obama vetoed the bill, only to have his veto overridden for the first time in his presidency.

But the tipping point for Washington's ire over Yemen appears to have been an October attack on a Yemeni funeral home that killed more than 140 people.

After that attack the U.S. announced a review to ensure "support for the Saudi-led Coalition is consistent with our foreign policy goals and values."

A United Nations panel has since found that "double-tap" strike was a violation of international humanitarian law.

Experts told the U.N. Security Council in a report obtained by AFP that it continues to investigate whether the second air strike directly harmed medical personnel in what could amount to war crimes.

U.S. officials are at pains to point out that today American involvement is limited.

"As of today our assistance continues. It's been very limited, consisting of refueling and limited advice on how to conduct strikes," said Pentagon spokesman Navy Captain Jeff Davis.

White House spokesman Josh Earnest said the U.S. would not be "refocusing our efforts to support the Saudis when it comes to enhancing their border security and their territorial integrity."

"We also are going to undertake steps to refocus our information sharing."

A senior U.S. administration official said that additional assistance would also focus on "training for the Saudi Air Force" to address targeting issues.

Saudi Arabia's government had no immediate comment on the US announcement.

Major General Ahmed Assiri, a spokesman for the Saudi-led coalition in Yemen told AFP "we don't comment on anonymous statements."

In March 2015, the Saudi-led coalition launched air strikes against Iran-supported Shiite Huthi rebels and their allies after the rebels overran much of Yemen.

More than 7,000 people have been killed in the conflict, mostly civilians, according to the United Nations.

A United Nations panel has since found that "double-tap" strike was a violation of international humanitarian law.

nothing the UN and its 'humanitarian' mouthpieces says is credible."