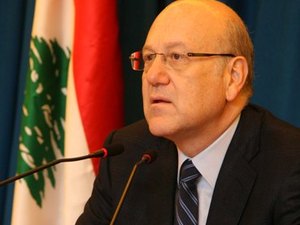 Prime Minister Saad Hariri and ex-PM Najib Miqati exchanged tirades on Monday in connection with the formation of a new 30-minister government led by Hariri.

“Here we are again before a totally inharmonious government, the thing that will deepen political polarization in Cabinet and make its mission harder, especially in tackling the numerous controversial issues,” Miqati told his visitors, according to a statement distributed by his office.

“We ask the prime minister about the soundness of the stances that he had declared -- whether personally or through MPs and close aides -- to justify the political shift that he made before the (presidential) vote,” Miqati added.

“We also ask PM Hariri whether he is still truly committed to the political slogans that he had continuously repeated throughout the past years and over which he waged fierce wars, topped by the U.N.-backed Special Tribunal for Lebanon,” the ex-PM went on to say.

“You know more than anyone else that we did not wage any wars and that we were the ones who faced wars, assassinations and treachery,” Hariri said.

Miqati also criticized Hariri's decision to represent Tripoli in the Cabinet with a single minister who is a member of his al-Mustaqbal parliamentary bloc.

“Despite our appreciation of the presence of our friend Labor Minister Mohammed Kabbara in the Cabinet, we are surprised that Tripoli's representation was limited to this, and we ask PM Hariri if it is fair to represent Tripoli in this manner,” the former premier said.

Addressing Hariri, he added: “After what has happened and what you have done, I call on you to conduct a full reevaluation of all the stances that you and your camp took regarding the government that I led (between 2011 and 2013), which preserved Lebanon during the most difficult period.”

“I also call on you to preserve the principles and foundations like we did,” Miqati said.

As if Miqtayis government was any better.

Miqati is much better than Hariri. No comparison. Too bad my Sunni brothers were too blind to see that before.

stop whining.... he is YOUR prime minister now.