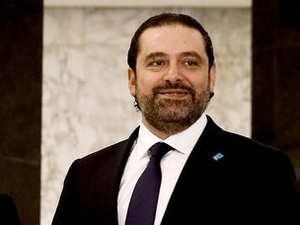 Prime Minister Saad Hariri praised the closing statement of the Middle East peace conference in Paris, which renewed the commitment to the two-state solution for the Arab-Israeli conflict.

On Twitter Hariri said: “We thank France for organizing the Mideast Peace and we thank President François Hollande for his just and courageous stance”.

He added: “There is no solution except one based on the Arab peace initiative adopted in Beirut and the establishment of the Palestinian state with Jerusalem as its capital.”

Hariri stressed that the Israeli settlement policy aims at imposing a fait accompli that would thwart any peace process. He also praised the adoption by the Paris closing statement of the United Nations Security Council resolution 2334, which condemns the settlement policy.

He concluded: “Lebanon will always adhere to the Arab unanimity and the full rights of the Palestinian brothers, especially the right of return. We will always remain against the settlement in Lebanon, in accordance with our Constitution.”

A conference for peace in the Middle East on Sunday warned Israel and the Palestinians against taking "unilateral steps" on Jerusalem and on borders that could imperil a negotiated solution to their seven-decade conflict.

Around 70 countries attending talks in Paris called on the two sides to avoid moves that "prejudge the outcome of negotiations on final status issues, including inter alia, Jerusalem, borders, security, refugees."

The participants in the conference "will not recognize" such steps, they warned in a statement.

They also agreed that the basis for the negotiations should be the 1967 borders, before Israel occupied the West Bank and east Jerusalem, French Foreign Minister Jean-Marc Ayrault told a press conference.