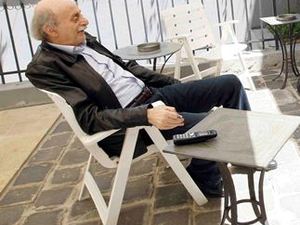 Druze leader MP Walid Jumblat on Friday reiterated his rejection of an electoral law based on proportional representation.

He had on Thursday stressed that the electoral law “must ensure a delicate balance in political and regional representation,” calling on President Michel Aoun, Speaker Nabih Berri, Premier Saad Hariri and the various political forces to “understand the demands of the Democratic Gathering that are in line with the Taef Accord.”

Jumblat's Progressive Socialist Party believes that a law fully based on proportional representation would marginalize the minority Druze community, whose presence is concentrated in the Chouf and Aley districts.

The PSP's concerns has pushed the party to renounce a law that mixes proportional representation with the winner-takes-all system that it had drafted together with al-Mustaqbal Movement and the Lebanese Forces.

what sectarian system? the shia troll flamethrower said there is no sectarian political system in Lebanon and the presence of Abbas Hashem as an MP within the fpm is living proof of its absence.

Article 24
(As amended by the Constitutional Law of October 17, 1927
And by order 129 of march 18, 1943,
And by the constitutional law of January 21, 1947,
And by the constitutional law September 21,1990)
The Chamber of Deputies shall be composed of elected members; their number and
the method of their election shall be determined by the electoral laws in effect. Until such
time as the Chamber enacts new electoral laws on a non-confessional basis, the distribution
of seats shall be according to the following principles:

a. Equal representation between Christians and Muslims.
b. Proportional representation among the confessional groups within each of the two religious
communities.
c. Proportional representation among geographic regions.
Exceptionally, and for one time only, the seats that are currently vacant, as well as the
new seats that have been established by law, shall be filled by appointment, all at once, and
by a two thirds majority of the Government of National Unity. This is to establish equality
between Christians and Muslims as stipulated in the Document of National Accord. The
electoral laws shall specify the details regarding the implementation of this clause.

he is an ex-marine in the US navy.... suffered rape and torture and the after effects are clearly showing.