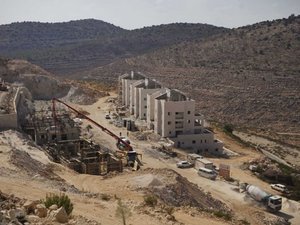 Meir Turjeman told AFP that city officials approved the plans that had been previously postponed at Prime Minister Benjamin Netanyahu's request in the wake of a U.N. Security Council resolution in December against Israeli settlement building.

Turjeman said plans for some 11,000 other homes were also in process in east Jerusalem, though he did not say when they could be moved forward.

The new permits are for homes in the settlement neighborhoods of Pisgat Zeev, Ramot and Ramat Shlomo, according to Turjeman, who also heads the planning committee that approved them.

"The rules of the game have changed with Donald Trump's arrival as president," he said.

"We no longer have our hands tied as in the time of Barack Obama. Now we can finally build."

Netanyahu said Sunday he was to speak with Trump later in the day, their first conversation since the billionaire businessman took office.

Trump has pledged strong support for Israel and vowed during his campaign to recognize Jerusalem as the country's capital despite the city's contested status.

It is about time that the Palestinian leadership, under Abu Mazen, whose term of office ended 8 years ago, realises that this will continue unless and until they wake up to the fact that they will not get their independent state by ignoring Israel but rather going to international organisations. The only way this will stop is to do something that they are refusing to do for the past 4 years, simply SIT DOWN AND TALK.

Rather than condemning the obviously illegal Israeli actions, philipo (aka Israeli Hasbara) go on a tirade against the Palestinians. He conveniently forgets that while Palestinians were negotiating Israel was also illegally building settlements.

Firstly, "Obvious illegal actions" obvious to whom? It is not illegal to build on a territory you occupied as the result of a war. Ask the French in Alsace Lorraine, ask the Germans in Schleswig Holstein. Ask the Italians in Aldo Adige. Closer at home, ask the Turks in Hatay.
Secondly, you may have had a case if Israel had occupied the territory from the Palestinians after the war, but get your facts right, they occupied it after defeating the Jordanians who were in control of the territory from 1948-1967.