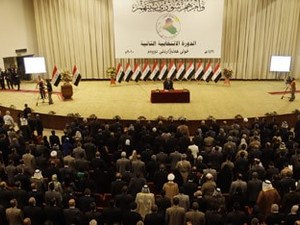 Baghdad called Monday for the United States to review its "wrong decision" to prevent Iraqis from entering the country as parliament backed reciprocal restrictions if Washington does not change course.

The responses from Baghdad are part of a growing backlash against President Donald Trump's executive order barring citizens of Iraq, Iran, Syria, Sudan, Somalia, Libya and Yemen from entering the U.S. for at least 90 days, a decision he billed as an effort to make America safe from "radical Islamic terrorists."

The travel restrictions, which come on the heels of repeated assertions by Trump that the U.S. should have stolen Iraq's oil before leaving in 2011, risk alienating the citizens and government of a country fighting against militants the president has cast as a major threat to America.

"We reject... the decision to prevent the reception of Iraqis in the United States of America, and call for its review," Foreign Minister Ibrahim al-Jaafari told U.S. ambassador Douglas Silliman, according to a statement on his website.

But "we (also) confirm our commitment to establishing better relations between Baghdad and Washington," Jaafari said.

The foreign ministry also issued a statement calling on the U.S. to "review this wrong decision."

"It is very unfortunate that this decision was issued towards an allied state linked by strategic partnership with the United States," it said.

The ministry noted the U.S. move "coincides with victories achieved by (Iraq's) brave fighters and with the support of the international coalition against the Daesh terrorist gangs in Mosul," referring to the battle to retake the city from the Islamic State jihadist group.

Parliament, meanwhile, urged the government to take similar measures against Americans if Washington does not reconsider its position.

Lawmakers voted for "a policy of reciprocity with the American decision in the event that the American side does not withdraw its decision," according to text read out before the vote.

It also called for the U.S. Congress to pressure the Trump administration to reconsider its decision, and for the .UN., Arab League and the Organization of Islamic Cooperation to oppose the measure.

And it said that if the U.S. does not roll back the move, this "will push Iraq to take policies and decisions commensurate with the preservation of its interests."

"We are against this stance from the new administration," lawmaker Sadiq al-Laban told AFP.

"We hope that the American administration will rethink... this decision," he added.

The parliamentary vote came a day after its foreign affairs committee made a similar call for Iraq to respond in kind to the U.S. measure.

Hassan Shwairid, the deputy head of the committee, said the committee's call did not apply to the thousands of American military personnel in the country as part of the US-led coalition against IS.

But U.S. senators John McCain and Lindsay Graham said Trump's ban could impact military cooperation and security in other ways.

"This executive order bans Iraqi pilots from coming to military bases in Arizona," where they have received training, they said in a joint statement.

"Ultimately, we fear this executive order will become a self-inflicted wound in the fight against terrorism."

The Hashed al-Shaabi, a powerful paramilitary umbrella organization that includes Iran-backed Shiite militias that fought against American forces in past years, appealed Sunday for U.S. citizens to be banned from the country.

Both units from the Hashed and American troops are deployed in the Mosul area as part of the operation to retake the city from IS, and heightened anti-U.S. sentiment among militiamen could increase the danger to Washington's forces.

"Get your nationals out before removing expatriates," said Sadr, scion of a powerful clerical family who rose to widespread fame due to his condemnation of and violent resistance to the U.S. invasion and occupation of Iraq.

The Iraqi parliament deserves every ounce of respect ( 1 ounce = 28.3495 grams ) for enacting a reciprocal travel ban on Americans if Washington does not withdraw its decision to bar the entry of Iraqis.

I could not write this without feeling sorry for the Americans queuing up at Iraqi embassies abroad begging for visas to enter Iraq.

puppet, you are so funny;)!

as tourists or workers, they do not queue up to enter Iraq but as traders and business opportunity seekers, they do!

learn here, instead of making fun of yourself.

How about the thousands of American troops helping the Iraqi army fight Isis? Oh wait! This ban applies only to American civilians and military personnel

When Southern takes a road, the road ends but the Southern continues>>>>>>>>> and falls off the cliff.

Southern - will you ever make sense .... Do you really expect anyone to take you seriously.

southern, did you by any chance read the article?

"Iraq Parliament Votes in Favor of Travel Ban on U.S."

it does make sense, but according to your biased mentally, not.... therefore it's your problem.

unlike you all, who spread the forum with biased statements and lies, i give my opinion, so it's not a question of interpretation... i repeat: i suppose the Iraqi govt will get rid of them soon, as ISIS is melting.... since they are only good at raping and looting.

your case is worrying!

Southern ... Despite many reservations vis Obama, every Lebanese, Syrian and Iraqi should kiss his feet's because without him Isis would have taken over those countries. Was it not for the US airforce and Marines assiting Kurds and Iraqi army, Isis would have by now occupied at least all of northern and central Iraq, much or all of Lebanon. It is more likely though they would have conquered all of Syria and likely Lebanon. The US Marines are the world most professional and potent armed force in the world and despite some individual actions, they are far and above the collection of sectarian militias recruited by Iran or the murderous gangs of Assad. Have some decency once in your life to utter the truth

Funny that even in regime circles, they refer to militias supporting the regime as affashin عفاشين because all what they do is loot. Isis without US support was about to take all of Kurdistan and all of central Iraq. We know these are opinions you are expressing which has no connection to reality. What we are giving you are facts.

Wow! Arab Democrat calls himself!!!! defending a criminal country like Usa and a criminal institution like the marines and praise them!

the only guilty for bringing those terrorists to middle east is America, which converted the region intio a fireball, all that is to please the zionist lobby which acts on behalf of Israel... change your name and your mentality too.

read this and stop spewing nonsense!

Southern ... It is clear where you get your info from. Yet another link with zero credibility. I need not defend the US or the marines. The US, despite its many flaws, is a democratic government where people can protest and not a criminal family enterprise (and yes that applies to every other arab country) like Syria or sectarian militias like iraq or a theocratic dictatorship like Iran. It is why we see Lebanese, Syrians, Iraqis, and Iranians wanting to immigrate to the US. When was the last time you saw people wanting willingly to immigrate to Iran? We would be lucky to have a system of governance as good as the US. As for the marines, this is not my opinion, it is the opinion of every sane person in the world. This is the most potent fighting force in the world. In addition, it is far more professional than any of the militias and armies you support. For god sake, you support a group of mass murderers.

the article should have read" Iranian parliament in Iraq".

*regardless, it is pitiful and funny.

Jannah's Houthian ex-husband was arrested in New York Yesterday. He is Houthian Iraqian and was on his way to Hollywood to star in a horror movie.

Homeland Security contacted Jannah last night asking for reference. She told them to keep him locked up and to torture him for all the evil he had done in his life.

This travel ban should include shia iranian terrorists from Lebanon too. I understand it is coming soon. Thank you President Trump.

Iraq was independent before the Americans invaded and now it is not. I believe you mean the shia of iraq owe the USA a lot for giving them control of Iraq.

Great, this means the infrastructure is now ready for them and they don't have to cross into Iran through ISIS infested Iraq and @flametroller should have no more iranian excuses.

The man is a liar. They still are prevented from going back to western Qalamoun, Qusair and Homs - all areas solidly under the regime control and its allied militia

we know he is liar and the majority of these refugees will never be allowed to go back into Syria as we know it. There is a clear intentional demographic and 'ethnic' cleansing going on in Syria. it's just the iranian flametroller keeps giving excuses for the regime and his hizb of terror.

texas, they already did ban Americans in reciprocity:) Yesterday

i did not understand much from your comment but i recognized 'Ya akzaba nas' so I immediately voted you up:)

we have a very sensitive devil worshipper tonight.

Funny how you use the Pavlov line I do flametroller, your bell is ringing.

Yes gigantic me to