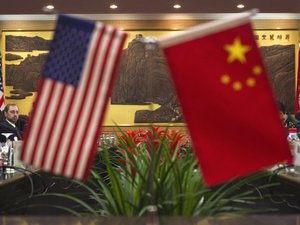 Chinese and U.S. defense officials opened military talks in Beijing on Wednesday after ties were strained by American arms sales to Taiwan and a planned U.S. troop deployment in Australia.

The talks, led by U.S. undersecretary of defense for policy Michele Flournoy and her Chinese counterpart Ma Xiaotian, come a day after China's President Hu Jintao urged the navy to prepare for military combat.

They are the first ministry-level talks between the two nations since September, when Washington announced a $5.85 billion upgrade to Taiwan's fleet of F-16 fighter jets, angering Beijing, which considers the island a breakaway province.

China's official Xinhua news agency said military relations between the two powers, the situations in the Korean Peninsula and the South China Sea and the sale of U.S. arms to Taiwan would be on the agenda.

Several Asian nations have competing claims over parts of the South China Sea, a strategically vital area believed to encompass huge oil and gas reserves, while China claims it all.

One-third of global seaborne trade passes through the maritime area and Vietnam and the Philippines have accused Chinese forces of increasing aggression there, ratcheting up tensions in the region.

On Tuesday, Hu said in a speech to China's Central Military Commission that the navy needed to "make extended preparations for military combat in order to make greater contributions to safeguard national security and world peace."

Opening the one-day annual meeting, Ma said the talks showed that "both countries are being sincere about maintaining military exchanges".

"Hopefully both sides will make the best of this opportunity to expand common ground, keep risks under control and avoid misjudgment," he added, according to Xinhua.