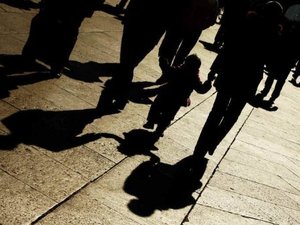 Child abductions and trafficking are rife in China, despite repeated police crackdowns -- a problem that many experts blame on the nation's strict "one-child" policy and lax regulations on adoption.

The public security ministry said in a statement that police in the southwestern province of Sichuan had chanced on clues that a child trafficking gang was operating there when dealing with a traffic accident in May.

Then in August, police in the southeastern province of Fujian discovered the existence of another gang involved in widespread child trafficking.

After a long period of evidence-gathering, more than 5,000 police officers from 10 different provinces across China launched a joint offensive on November 30, arresting 608 suspects.

They rescued 178 children, who have now been placed in welfare agencies, in what the statement called "the biggest victory yet for anti-trafficking" operations.

It did not say how old the children were, or whether they had been reunited with their parents.

Lax adoption rules for childless couples in China have led to a thriving underground market for kidnapping, buying and selling children.

Many academics also blame the problem on the nation's strict "one-child" policy, which has put a premium on baby boys, as many families want a male heir.

As such, some parents who are unable to have a son or want a second child opt to buy one, and baby girls are also sometimes sold on to traffickers.

Police said in July they had freed 89 children in a crackdown on trafficking launched this year, arresting 369 people in the operation.

In November, police in the eastern province of Shandong also broke up a human trafficking gang that bought babies from poor families and sold them on for as much as $8,000.

And in 2007, in a scandal that shocked the nation, authorities found that thousands of people had been forced into slave labor in brickyards and mines across the nation.