Karzai Back in Kabul to Meet Shrine Bomb Victims 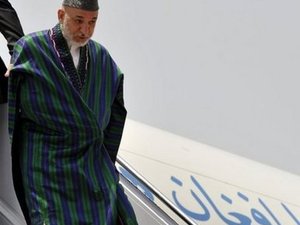 Afghan President Hamid Karzai arrived back in Kabul on Wednesday after cancelling a planned trip to Britain to visit victims of a bombing which killed 55 people, his spokesman said.

Later in the day, Karzai will visit a hospital in the city where dozens of people injured in the bombing are being treated, the spokesman added.

Karzai was in Germany when Tuesday's massive attack took place, the day after the Bonn conference on the future of Afghanistan.

But he cancelled a planned onward trip to Britain after the attack.

It was the deadliest strike on the capital in three years and Karzai said it was the first time insurgents had targeted such an important religious day.

The Taliban, the main militant group responsible for most attacks in Afghanistan, have denied responsibility for the bombing.