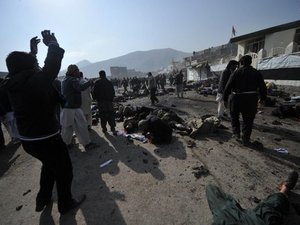 A U.S. citizen was one of at least 55 people killed in Tuesday's blast near a Shiite shrine in the Afghan capital Kabul, the U.S. embassy in the city said Wednesday.

The embassy added that its staff were in contact with the dead person's family and were "providing all appropriate consular assistance".

The blast happened as Shiite Muslims marked the holy day of Ashura, ripping through a crowd of worshippers and leaving a devastating aftermath.

The Afghan Taliban has denied responsibility for the attack.