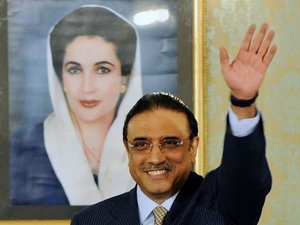 Pakistani President Asif Ali Zardari suffered a "minor heart attack" and has undergone an operation in Dubai, but is in good health otherwise and will return to Islamabad Thursday, a minister told Agence France Presse.

Mustafa Khokhar, minister in charge of human rights, said that contrary to media reports there was "no question of any resignation" by Zardari, who is under pressure over a scandal that saw his ambassador to the U.S. step down.

"He had a minor heart attack on Tuesday. He flew to Dubai where he had an angioplasty. He's in good health now. He will come back tomorrow. There's no question of any resignation," Khokhar told AFP on Wednesday.

The minister contradicted presidential spokesman Farhatullah Babar who said Zardari had been in hospital for tests and a planned medical check-up.

State media said Zardari was accompanied by his physicians and personal staff, and that the tests were routine, linked to a "previously diagnosed cardiovascular condition.”

Zardari has been under pressure from a scandal over a memo that has seen Pakistan's ambassador to the United States resign, and had announced on Sunday that he would soon address a joint session of parliament.