Jordan Says Will Not Invite Syria to Arab Summit 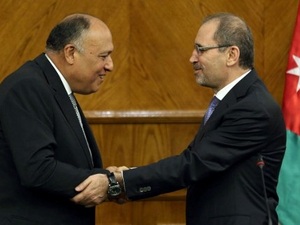 Jordan said Wednesday it would not invite Syria to an Arab summit next month, five years after the bloc suspended Damascus over a harsh crackdown against protesters.

Jordan is set to host the Arab League's annual summit near the Dead Sea on March 29.

"How the invitations are dealt with will be based on the decisions of the Arab League, and we will abide by what it has decided," Jordanian Foreign Minister Ayman Safadi said.

The bloc suspended Syria's membership in late 2011 after anti-regime demonstrations were met with brutal repression.

Russian Foreign Minister Sergei Lavrov called last week for Damascus to be allowed to rejoin the bloc, saying that could help in the search for a negotiated settlement of the conflict.

But Arab League chief Ahmed Aboul Gheit, speaking alongside Lavrov in Abu Dhabi, ruled out an early return of Syria to the Cairo-based bloc.

Some of the Arab League's most influential members, including Saudi Arabia, are sworn enemies of the Damascus regime which is backed by Riyadh's regional rival Tehran.

Safadi said Wednesday that Jordan was not in direct contact with Iran over the Syrian conflict.

More than 310,000 people have been killed in Syria since the war began in March 2011, according to the Syrian Observatory for Human Rights.