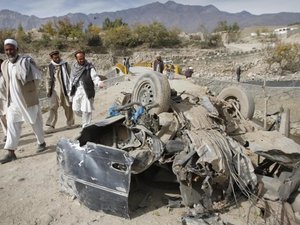 The death toll in a roadside bombing Wednesday in southern Afghanistan's Helmand province has risen to 19, 12 of them women and children, local officials said.

Helmand governor's spokesman Daud Ahmedi and provincial security force commander Mohammad Ismail both confirmed that 19 people including women and children had been killed. Ahmedi initially put the death toll at 12.

"Nineteen people including seven women and five children have been killed in today's IED (improvised explosive device) attack. The seven women are from the same family. Five people have been injured." said Ismail.

The blasts came as the civilians travelled from provincial capital Lashkar Gah to Sangin district, historically one of the most troubled in Afghanistan.

Parts of Helmand remain highly unstable although Lashkar Gah is under the control of Afghan forces and three other districts are due to transition from NATO to Afghan security control within weeks.

The deaths came the day after 59 people died in two blasts at Shiite shrines, 55 of them in Kabul.

There are around 140,000 international troops, mainly from the United States, in Afghanistan helping government forces combat the insurgency.

According to the U.N., the number of civilians killed in violence in Afghanistan rose by 15 per cent in the first six months of this year to 1,462, with insurgents blamed for 80 percent of the killings.