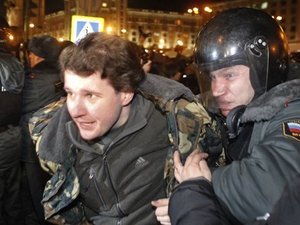 Russian state-run television news channels on Wednesday turned a blind eye to the post-election protests in Moscow and other cities, leaving Internet sites as the only source of blow-by-blow coverage.

On Tuesday evening, as police arrested at least 300 people in a central Moscow square, the country's main news show turned to Angelina Jolie's directorial debut and a Russian woman arrested abroad for faking a $100 bill.

Neither made any mention of opposition supporters holding the second mass rally in two days contesting the results of parliamentary polls, marked by riot police detaining at least 300 people, according to police.

State-controlled Channel One's newsreader Yekaterina Andreyeva did cover rallies in Moscow, but only official ones held by pro-Kremlin youth groups.

"You are hiding information from millions of people...," he told them. "In these days you are disgracing yourselves and your profession."

On Wednesday, the Channel One continued to ignore the story.

Its noon show led on an aeroplane that overshot a runway as it landed. No one was injured.

The show did air footage of rioters flinging firebombs and helmeted riot police -- but that item was filmed in Athens, not in Moscow.

NTV, owned by state-controlled gas giant Gazprom, ran stories on Israel, Greece and the 70th anniversary of the Pearl Harbor, with domestic coverage included a defective apartment block and football.

But its website did run stories about the protests.

Even state news organizations offered more coverage than the television stations. RIA Novosti won praise for running live coverage of the protest on its website.

A major source of coverage was from new and independent Internet television channel Dozhd (Rain). It had a correspondent at the scene from the start of the protest and ran live footage.

"Five riot police are just grabbing a single person, dragging and shoving him in," reporter Karine Orlova said by phone to the studio. "They just seem to have an order to detain a certain number of people."

She also visited one of the same official United Russia rallies that Channel One had touched on, but had a very different take on it.

"There are very few people," she said. "They were bussed in from Smolensk and Bryansk... they really have no idea what they're doing here."