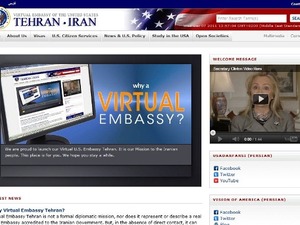 Iran on Wednesday blocked an Internet website the United States was touting as a "virtual embassy," and which one senior MP slammed as an attempt to deceive the Iranian people.

The address, http://iran.usembassy.gov/, was inaccessible inside Iran, instead showing a message in Farsi saying: "In accordance with computer crime laws, access to this website is not possible."

Alaeddin Borujerdi, the head of the Iranian parliamentary national security and foreign policy commission, said the new U.S. website was a misguided attempt to make the Iranian people believe Washington wanted to communicate with them.

"The opening of the virtual embassy by the U.S. is a new deception by the Great Satan," he said, according to the parliamentary news agency.

"The Iranian nation will not be fooled by this deception," he said.

The United States opened the Internet-only "embassy" on Tuesday, saying it wanted to reach out to Iranians despite the absence of official ties, and vowing to break through the Islamic regime's "electronic curtain."

The website offers U.S. policy statements in English and Farsi, gives information on U.S. visas, and provides news from the U.S.-funded Voice of America.

Damn! Who would have thought!