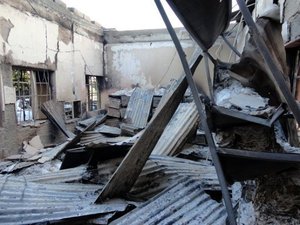 A powerful explosion rocked the northern Nigerian city of Kaduna on Wednesday, killing at least eight people, wounding many others and causing panic, but the cause of the blast remained unclear.

Witnesses and officials described a grisly scene at the blast site, with a number of shops and houses destroyed and body parts littering the area which rescue workers rushed to retrieve.

Police initially said the explosion appeared accidental, but speculation over whether it was caused by a bomb intensified due to the blast's strength and rumors spread through the city over who may have been the target.

Kaduna, located in the mainly Muslim north, has been on edge since being hit by some of the worst rioting following April elections won by President Goodluck Jonathan, a Christian from the south.

Nigeria's north has also been hit in recent months by scores of bombings and shootings blamed on Islamist sect Boko Haram, some of them in Kaduna, which staged a peace conference this week featuring a number of high-profile figures.

Wednesday's explosion went off in an area filled with shops selling spare auto parts and other goods in an area of the city mainly populated by Christian Igbos.

"One of the dead victims from the Kaduna explosion is a three-year-old child whose parent has taken the body for burial," said Yushau Shuaib, spokesman for the national emergency management agency.

"So far seven bodies were taken to mortuary while many injured victims are receiving attention in hospitals." Another official from the agency specified that a total of eight people had so far been confirmed killed.

Shuaib said the area was littered with mangled body parts that were being collected by rescue workers, making it difficult to come up with a precise death toll.

"It was a strong explosion," Shuaib said, declining to speculate on the cause.

Police spokesman Aminu Lawan had earlier said that initial information indicated that the blast was accidental.

"Initially, we thought it was a bomb blast, but our preliminary assessment has shown that it was an accidental explosion from a repair shop dealing in car batteries and gas cylinders," Lawan said.

Residents reported panic after the blast

"There was an explosion from a gas cylinder in one of the spare parts shops in the area and rumors went round the city that there was a bomb attack in the area," Abdullahi Ibrahim, an iron vender, said by telephone.

"Because the area is largely populated by Christian Igbo traders dealing in spare parts and refrigerators, people thought the explosion was targeted at them. There was panic in some parts of the city."

A local journalist said residents also reported seeing what looked to be a bomb tossed from a motorbike carrying two people, with one of them among the victims, but the information was unconfirmed.

Three days of riots across the north, particularly in Kaduna, immediately following April's presidential elections killed more than 800 people, according to rights groups.

Boko Haram has waged a string of attacks, mostly in the northeastern city of Maiduguri and surrounding area, but it also claimed the August suicide bombing of U.N. headquarters in Abuja that killed at least 24 people.

Kaduna is a major city in northern Nigeria, Africa's most populous nation of 160 million people roughly divided between a mainly Muslim north and predominately Christian south.