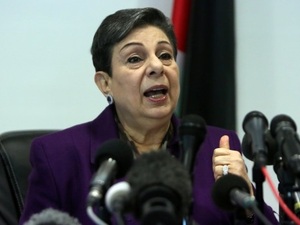 U.S. President Donald Trump's break with decades of support for a two-state solution to the Israeli-Palestinian conflict is irresponsible and does not advance peace, a senior Palestinian official said on Wednesday.

"This does not make sense," Palestine Liberation Organization (PLO) executive committee member Hanan Ashrawi told AFP. "This is not a responsible policy and it does not serve the cause of peace.

"They cannot just say that without an alternative," she added.

On Tuesday, a senior White House official said the United States would no longer seek to dictate the terms of any eventual peace settlement by insisting on a Palestinian state alongside Israel, but would support whatever the two sides agree together.

"A two-state solution that doesn't bring peace is not a goal that anybody wants to achieve," the official said on condition of anonymity.

For the better part of half a century, successive U.S. governments -- both Republican and Democrat -- have backed a two-state solution.

PLO secretary-general Saeb Erekat said the organization remained committed to two states and would oppose any system that discriminated against Palestinians.

"Israel refuses one democratic secular state where Jews, Muslims and Christians can be equal and those in government in Israel want to destroy the two-state solution," he told a press conference.

"The alternative will not and cannot be one state, two systems."

Trump has not spoken directly to the Palestinian leadership since taking office last month.

A spokesman for Hamas, the Palestinian Islamist movement that controls Gaza, said the announcement was "confirmation that the so-called peace process is an illusion."

Unlike the PLO, Hamas does not recognize Israel, and calls on the Palestinian leadership in the West Bank to drop its openness to negotiations.

Netanyahu's visit comes amid pressure from many of his allies to use Trump's election as an opportunity to kill off the two-state solution.

It is the first time in four terms that Netanyahu's leadership has coincided with a Republican in the White House.

"The U.S. administration is trying to accommodate Netanyahu's extremist coalition," she said.

Sallai Meridor, Israeli ambassador to the U.S. under the previous government, said the announcement may make it harder to get meaningful negotiations.

"Nor is it likely to see the Arab countries feel comfortable joining any process if the issue of a Palestinian state is not on the table."