U.S. Urges Pakistan to Act after Attacks on Afghan Shiites 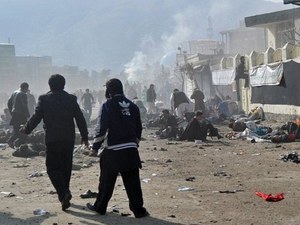 The United States on Wednesday urged greater action by Pakistan against a Sunni Muslim militant group that Afghanistan blamed for an unprecedented massacre against its Shiite minority.

Fifty-five people were killed in Kabul and another four in a similar attack in the northern city of Mazar-i-Sharif.

State Department spokesman Mark Toner said the United States did not know the full details of the attacks but that Secretary of State Hillary Clinton had Lashkar-i-Jhangvi in mind when she urged Pakistan to act against extremists during an October visit to Islamabad.

"It's precisely the kind of organization that the Secretary was trying to address when she went to Pakistan in calling for Pakistan to do more to combat this kind of extremist terrorist activity within its own borders," Toner told reporters.

Pointing out that Lashkar-i-Jhangvi has been blamed for attacks in Pakistan as well, Toner said: "It's clearly a threat to both countries."

"It's just too important, the threat we face. There needs to be ongoing, sustained and even increased cooperation and coordination between Afghanistan (and) Pakistan and certainly with the international community," Toner said.

Toner also confirmed that one U.S. citizen was among the dead in Kabul. He said that the American was a civilian and not linked to the U.S. government but declined further details, saying the family had requested privacy.

Karzai on Wednesday vowed to press Pakistan to take action against the Lashkar-i-Jhangvi, potentially raising fresh tensions between the neighbors days after Pakistan boycotted an international conference on Afghanistan.

Pakistan asked Afghanistan to share any evidence pointing to Lashkar-i-Jhangvi, a Sunni Muslim extremist movement that was banned in 2001 by then military ruler Pervez Musharraf.

Lashkar-i-Jhangvi was one of the groups implicated in the kidnapping and beheading in 2002 of U.S. journalist Daniel Pearl. But it has not before been tied to attacks in Afghanistan, where the Shiite community has largely lived in peace even during the rule of the hardline Sunni Taliban regime.

The US should not worry, Iran will defend the Shias there! or will it?

Just like you defend the hundreds of thousands Iraqis, Palestinians and Afgan sunnis killed by your weakening and increasingly irrelevant USA. Hypocrits. Lak 7aaaaj aret 7aki bahdalto 7alkon. I was a strong Aounist until I saw how he went nuts. I am not a follower. But one thing I am not, and you are, is a goddamned hypocrite.