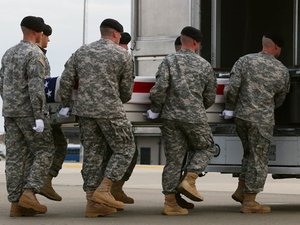 The U.S. Air Force dumped the cremated, partial remains of at least 274 troops in a landfill before halting the secretive practice in 2008, the Washington Post reported Thursday.

The procedure was never formally authorized or disclosed to senior Pentagon officials, who conducted a review of the cremation policies of Dover Air Base -- the main point of entry for U.S. war dead -- in 2008, the Post said.

Nor was the dumping ever disclosed to the families of the fallen troops, who had authorized the military to dispose of the remains in a respectful and dignified manner, the Post said, citing Air Force officials.

The newspaper quoted officials as saying that a precise count of the remains disposed of at a Virginia landfill would require searching through the records of 6,300 troops whose remains have passed through Dover since 2001.

An additional group of 1,762 remains -- which could not undergo DNA testing because they were badly damaged or burned -- were also disposed of in this manner, the Post said, citing the Air Force.

After allegations from whistle-blowers, an Air Force probe found that two "portions of the remains" of fallen troops had been lost and uncovered other problems at the morgue.

New procedures have been put in place at the mortuary and the commander at the morgue, a colonel, together with two civilian officials were disciplined over the episode but not sacked.

The Dover affair echoes a scandal that erupted last year at Arlington National Cemetery, the country's hallowed ground for war dead. Investigators there uncovered cases of misidentified remains and mismanagement.

Following an Army probe, the conduct at Arlington is now the subject of a criminal investigation.

The void this revelation creates, calls for some serious questions about what goes on behind the scenes of all branches of the Government, I have been married to Military memebrs of the Army and Air Force, My Grand daughter is in the Navy, and my Grandson who just graduated from High School is in Boot Camp in the Marines, I feel a sadness for them and those who are lured in ot harms way based on false promises and hidden agendas, I wouder of Wiki Leaks was trying to help The Bradly expose this and perhaps worse? This is proof of the disregard and void of value for human beings, this is the same kind of behaviir the Germans used to dispose of it's victims ,Who knows maybe those who was dumped in the land fiil might have been decenters, and killed by our own Military, It is strange to accept the excuse of DNA Distruction due to the extent of damage in the way the Soldiers died, The Public have a right to know who died when and how.I'm a Tax payer Our money is misued .