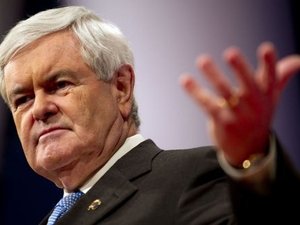 Republican presidential hopeful Newt Gingrich said Wednesday that Pakistan's nuclear arsenal was at risk of being seized by "extremists" who had probably infiltrated Islamabad's military.

"My guess is that they have well over 100 nuclear weapons and that the Pakistani military is so penetrated by extremist elements you have no idea if one morning, they are going to lose three or four of them. I mean just have them stolen," Gingrich told CNN's Situation Room program.

Gingrich, a veteran Republican who has surged in recent weeks to the top of the pack of contenders vying to unseat Democratic President Barack Obama, also derided Pakistan's claims that officials did not know Osama bin Laden had been hiding there for years before elite U.S. forces found and killed him in May.

"The Pakistani military was capable of protecting bin Laden for six years," in Abbottabad, a major military city north of Islamabad, Gingrich said.

"Now do I think Osama bin Laden was sitting a mile from the national military university and nobody noticed him in their intelligence service? It's inconceivable," the presidential hopeful said.

The safety of Islamabad's nuclear weapons has been heightened ever since the September 11, 2001 attacks in the United States, when Pakistan's then military ruler Pervez Musharraf allied his country with Washington's "war on terror."

But Pakistan has suffered hundreds of deadly attacks from anti-U.S. militants in the decade since. The fear of extremists gaining access to an atomic weapon has also surged in tandem with Washington losing trust in Pakistan since the revelation that bin Laden had been sheltering there.

U.S. opinion polls on Tuesday showed Gingrich, a former speaker in the House of Representatives, had extended his lead over rivals, both in the leadoff Iowa caucus nominating contest and nationwide.