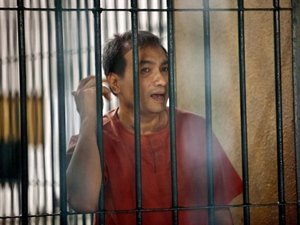 A court in Thailand on Thursday jailed a Thai-born American for two-and-a-half years for defaming the monarchy -- a sentence that the United States criticized as "severe".

The conviction of Joe Wichai Commart Gordon -- who appeared in court in shackles -- is the latest in a series of cases under the kingdom's strict lese majestic laws, which rights campaigners say are used to stifle free speech.

The Criminal Court sentenced Gordon to five years in prison, but halved the term as the car salesman from Colorado pleaded guilty to publishing online a banned biography of King Bhumibol Adulyadej that he translated into Thai.

"Joe decided not to appeal this case but will ask for a royal pardon," his lawyer Arnon Nampa told reporters in Bangkok.

"In this case the court gave the lightest jail term for a lese majestic case. He's been in prison six months already. The worst case is two more years in jail but I hope that he'll receive a royal pardon."

Gordon, 55, was arrested in May on a visit to the kingdom and accused of posting the material deemed offensive while living in the United States.

Under Thailand's lese majestic legislation, anyone convicted of insulting the king, queen, heir or regent faces up to 15 years in prison on each count.

A U.S. official said Gordon should not have been jailed at all.

"We consider the sentence severe because he was given the sentence for his right of expression," U.S. Consul General Elizabeth Pratt told reporters.

"We continue to respect the Thai monarchy but we also support the right of expression which is internationally recognized as a human right."

Washington, which counts Thailand as one of its oldest allies, on Tuesday voiced alarm over a series of court cases in the kingdom over speech deemed to be offensive to the monarchy.

Critics say that Thailand has increased use of its lese majestic legislation as a way to suppress freedom of expression, particularly under the last government, which was supported by the Bangkok-based elite.

Observers say the new administration of Prime Minister Yingluck Shinawatra, who took power in August, has yet to improve the situation.

In a conviction that alarmed activists, 61-year-old Ampon Tangnoppakul was jailed last month for 20 years on four counts of sending messages to the private secretary of the then prime minister Abhisit Vejjajiva in May 2010.

The European Union said it was "deeply concerned" about that sentence.

A group of activists opposed to the legislation plan a "fearlessness walk" in Bangkok on Saturday in support of Ampon and other political prisoners.

Despite the protests, the Thai government said Wednesday it had set up a committee to clamp down on websites considered insulting to the monarchy.

Deputy Prime Minister Chalerm Yubumrung said he would chair the first meeting of the group this week, including representatives from the police, the interior ministry and other related agencies.

Thailand's frail king, who turned 84 on Monday, has reigned for 65 years but has been in hospital since September 2009.

Any discussion of the royal family is extremely sensitive in the politically turbulent nation, where the palace has also been silent over the organization of the king's succession.