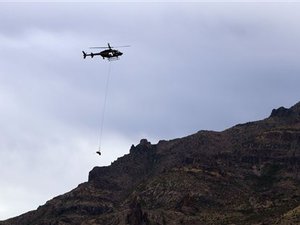 A helicopter taking people on a luxury sunset tour of the Las Vegas Strip and Hoover Dam crashed into a mountainside Wednesday, killing the pilot and the four passengers on board, federal authorities said.

The aircraft operated by Sundance Helicopters collided into the River Mountains surrounding Lake Mead just before 5 p.m., said National Park Service spokesman Andrew Munoz. Numerous witnesses heard the crash and reported seeing smoke about 4 miles west of the lake's edge, Munoz said, and officials determined that all five people on board were killed.

The remote crash site, about 30 miles from the Las Vegas Strip, is not accessible by road, which slowed down the initial rescue and later prompted officials to delay any recovery and investigation until early Thursday morning.

A park ranger rode in a 4-wheel-drive truck to the crash site late Wednesday to protect the bodies and debris until the investigation resumes, Munoz said.

Authorities did not release any information about the identities of the victims.

A spokesman at Sundance Helicopters told The Associated Press that the helicopter had been giving a local tour when it suddenly went missing. He didn't give his name and declined to answer further questions.

"Fly in a state of the art luxury air-conditioned 6 passenger jet helicopter," the website says.

It's unclear what might have triggered the crash. The weather was mostly clear near Lake Mead on Wednesday, with a low temperature around 29 and winds around 5 mph. Munoz said there were no notable conditions that might have caused the accident.

State records show Sundance Helicopters has been in business since 1985. The company offers daily tours to the Grand Canyon and its website boasts a 23-helicopter fleet serving more than 160,000 passengers annually.

Sundance Helicopters has had previous accidents.

A pilot and six passengers were killed in September 2003 when a helicopter slammed into a wall while maneuvering through Descent Canyon, east of the Grand Canyon West Airport. In a 2007 letter that made safety recommendations to air tour operators and the FAA, the National Transportation Safety Board cited unsafe flying procedures and pilot misjudgment as the probable cause of that crash.

The safety board said Sundance passengers and photographic and videotape evidence "indicated that it was not unusual for the accident pilot to fly the helicopter close to canyon walls and at bank angles, pitch attitudes and airspeeds." The company also received at least two written complaints from passengers previously about the pilot but did not discipline him.

In August 2009, the pilot of a Sundance tour helicopter returning from the Grand Canyon with six passengers on board was forced to land in the Lake Mead National Recreation Area after the controls indicated an electrical problem. No one was injured.

Sundance's website says, "All our helicopters are maintained with exacting precision and our pilots are trained then retrained with ongoing recertification in excess of FAA requirements."