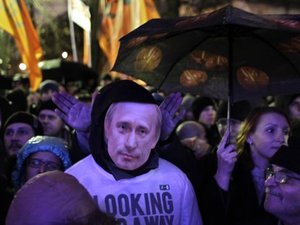 Prime Minister Vladimir Putin on Thursday accused the United States of stirring up controversy over Russia's polls and warned those protesting the result they would be punished if they broke the law.

After three days of protests against election results the opposition says were rigged, Putin said the authorities should enter into dialogue with the opposition. But he accused some of its leaders of acting selfishly.

"If somebody breaks the law then the security forces must implement the law with full legal means," Putin said in his first public comments on the demonstrations.

Russia's opposition has vowed to stage a mass protest in Moscow at the weekend to contest the results of elections, despite the arrest of around 1,000 people in previous demonstrations.

Putin said that "if people act in accordance with the law, they should be given the opportunity to express themselves, and we should not limit these civil rights."

But he lashed out at U.S. Secretary of State Hillary Clinton, who he said had criticized Sunday's elections before even reading the reports of international monitors.

The U.S. criticism "had set the tone for some people inside the country and given a signal," Putin said.

"They heard the signal and with the support of the U.S. State Department started active work.

"We are all adults here, and we all understand that some of the organizers are following a well-known scenario, and they have their own narrow political goals," he said in comments broadcast on state television.

In the run-up to the election, Putin had already accused the West of funding Russian NGOs with the aim of questioning the validity of the elections.

Russia did not want to see the instability endured by Ukraine and Kyrgyzstan, he said, referring to the two ex-Soviet states that saw regimes toppled in uprisings after the fall of the Soviet Union.

"But we also know that people in our country do not want the situation in Russia to develop like it was in Kyrgyzstan or in Ukraine. No-one wants chaos," he said.

Putin also said there should be dialogue between the regime and the opposition.

"We should engage in dialogue with those who are in an oppositional mood, to give them a chance to express themselves using their constitutional right to demonstrate, to express their opinion."

Around 1,000 people have been arrested in three days of demonstrations protesting what they say was mass fraud in Sunday's polls. The election was won by Putin's ruling party, though with a sharply reduced majority and less than half the vote.