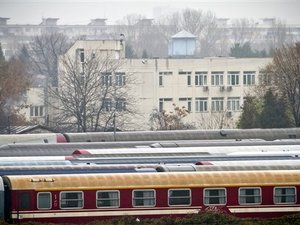 The CIA used a clandestine detention center in Bucharest to interrogate al-Qaida suspects, including the mastermind of the 9/11 attacks, according to an investigation revealed by German media Thursday.

The prison, used between 2003 and 2006, was in the cellar of a government building in a northwestern residential neighborhood of the Romanian capital, the Sueddeutsche Zeitung newspaper and ARD public television said.

The building housed the Office of the National Register for Secret State Information, or ORNISS, which stored confidential information and ensured only authorized people gained access to it, the reports said.

According to the investigation, detainees included Khaled Sheikh Mohammed, a top al-Qaida operative and mastermind of the September 11 attacks on the United States in 2001, who was arrested in Pakistan in 2003.

Abd al-Rahim al-Nashiri, the alleged plotter of the USS Cole bombing in Yemen in 2000, was also held at the Romanian center, ARD said.

Journalists from the two media organizations, as well as the Associated Press news agency, said the center was identified in photos by former CIA operatives active in Bucharest.

The center was codenamed "Bright Light", the Sueddeutsche newspaper said.

Although the existence of a so-called "black site" in Romania, set up by the Central Intelligence Agency as part of its clandestine counter-terrorism operations, has long been suspected, its location was unknown.

Just days before the 10th anniversary of the September 11 attacks, the Council of Europe's human rights chief urged Poland, Romania and Lithuania to lift the lid on CIA "black sites" where detainees were allegedly tortured on their soil.

Romania has vehemently denied hosting such a site.

In ARD's Panorama program, due to be broadcast later Thursday, an ORNISS official denied the prison had existed on its premises, according to a statement from the television station.

ORNISS was reported to have been set up for Romania's 2004 NATO entry. ARD said the Brussels-based alliance declined comment.