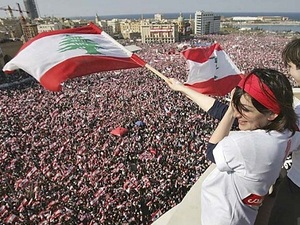 Prime Minister Saad Hariri marked the 12th anniversary of March 14 alliance on Tuesday and said it has set the foundations for Lebanon's free, sovereign and independent political life.

“Today we celebrate March 14 Day, the day that founded our political life. On this day we called for freedom, sovereignty, independence, truth and justice,” said Hariri marking the occasion in a video released on social media.

“Concerning truth and justice, we have now an international tribunal,” continued Hariri, referring to the Special Tribunal for Lebanon that was established to carry out investigation and prosecution of those responsible for the February 14, 2005 assassination of his father ex-PM Rafik Hariri.

He added: “I would like to say that this day remains engraved in my mind, in my life and my heart, and I hope that it will remain engraved in your hearts and minds too.”

March 14 coalition takes its name from the historic demonstration in downtown Beirut's Martyrs Square on March 14, 2005 that ultimately led to the withdrawal of Syrian forces from Lebanon in the aftermath of ex-Premier Rafik Hariri's assassination.

Sad days! I look around and can't see any courageous soul defending the principles of the Cedar Revolution... the most extraordinary event in Lebanese history when the silent majority liberated Lebanon from the Syrian occupation and gave hope for independence, freedom, democracy and sovereignty. Makes me wonder is such a subservient people ever deserves to be free!

and i remember how silent the present M14 gang were when the people rose! no one dared say a thing before kidnapping the revolution for their own benefit pretending they were at its origin...