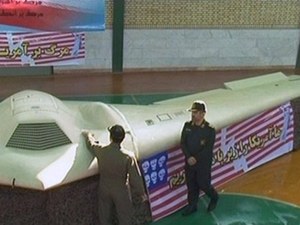 Iran made a formal protest on Thursday over a U.S. drone entering "deep" into its eastern airspace last week, and aired footage of what appeared to be the downed aircraft on state television.

Swiss ambassador Livia Leu Agosti was summoned to the foreign ministry and told the incident suggests Washington has upped its "provocative and covert actions" against the Islamic regime, the state television website reported.

The Swiss embassy handles U.S. interests in the absence of Iran-U.S. diplomatic ties.

Iran "strongly protests the violation of an RQ-170 spy aircraft deep into its airspace," the report said, adding that Tehran asked for "an urgent response and compensation from the U.S. government."

It did not elaborate.

Iranian media said late Sunday an RQ-170 unmanned aerial vehicle was shot down after making an incursion slightly into Iranian airspace. But no precise indication has been given by Iranian officials on where it crashed.

U.S. media said the drone crashed in eastern Iran probably due to malfunction.

The RQ-170 Sentinel is a high-altitude stealth reconnaissance drone made by Lockheed Martin, whose existence was exposed in 2009 by specialized reviews and later confirmed by the U.S. Air Force in 2010.

On Thursday, Iran's foreign ministry said in a written complaint passed on to the Swiss ambassador that it holds "the U.S. government fully responsible for this action, which is against all known international laws and regulations."

Iran's state television aired Thursday evening footage of what it said was the captured drone, showing what appeared to be an RQ-170 Sentinel in good shape and with little visible damage.

The footage showed a cream-colored aircraft being examined by two commanders of the elite Revolutionary Guard, who are in charge of the country's air defenses.

One of them, Brigadier General Amir-Ali Hajizadeh who heads the Guards' aerospace unit, claimed the drone had been captured through a cyber attack.

"It fell into the trap of (the Guards) electronic warfare unit who then managed to land it with minimum damage," Hajizadeh said.

He also said Iranian experts were "well aware of what priceless technological information" could be gathered from the aircraft, without elaborating.

U.S. media have reported fears in the United States that Iran could access and make use of highly-advanced technology found in the drone.

But a U.S. official, who declined to be named, said on Wednesday that the United States had doubts "the Iranians have the expertise" to exploit the technology found in the wrecked vehicle.

According to U.S. media reports Thursday, revelations about the U.S. stealth drone suggest Washington is stepping up surveillance and pressure on the Islamic republic over its nuclear program.

The New York Times reported that the drone was part of a surveillance program that has frequently sent the hard-to-detect aircraft into Iran to map suspected nuclear sites.

The crash came at a time of heightened political tension over Iran's nuclear program, with speculation rife that Israel is mulling air strikes against Iranian atomic facilities, with or without U.S. backing.

Gabby, don't believe this truth. These are lies and fabrications and fables and tales and whatever you name it. Rambo is Rambo, not only in movies. Any updates about ASSad, my friend?

It is a lie and made up story by computer graphics software.

Show us the serial numbers of this smart move and hacked drone.
If it was not totally destroyed object which fell from 50,000feet then we would have seen better and closer pictures than this displayed fake pictures which show more of Death to America and Israel banners than the actual object.

Amid this really Cold Hot War Iran has won a technological battle.. Iran like China has a good reputation when it comes to reverse engineering..Once the secret is shared the US will lose one of its key competitive advantages!!!
As per the pictures above they are simply a mock up... Apparently the Iranians are good in rapid prototypying as well
Cheers
MrBRain

I apologize for the mock up comments.. After watching the Video I have to admit it might be the real one on display...What is dazzling is the TV is showing an intact drone!! This implies that the Iranian hacked the drone.....
I didn't imagine the Iranian having such capabilities!!!
MrBRain

funny how the iranians spend millions of dollars in technology and arms and military nuclear program to preserve their dictatorship instead of improving the quality of life of the iranian people ...
if they were a true islamic country they would rather take example on the golden a
whether fascist, islamic or communist all dictatorships act the same way...

PEACE, you clearly have no clue about life in Iran, and all you know about it is from some media. You're the equivalent of Americans who think that we ride camels and live in tents in the middle of the desert just because we are Arabs/live in the Middle East. I'd advise you to go on a tourist trip to Tehran and see how they truly live.

Anyways, Russia and China are probably drooling all over it and they probably already got access to this flying beauty.